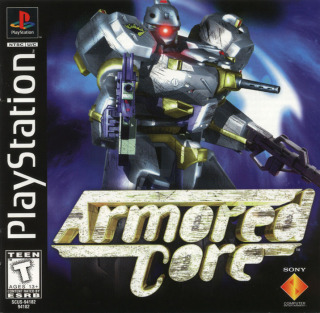 Transformers, more than meets the eye. Yeah, this has nothing to do with Transformers. This is an action, third person shooter, Mecha simulation developed by From Software in Japan. So, it's more like every single Anime to ever do with fighting robots.

The game takes place in what we can only assume is some time in the future after a major event simply dubbed The Great Destruction (and I thought my titles were bland) wiped out the majority of Earth's population leaving those who survived the event to live underground where powerful companies rose to power. The two most noticeable being Murakumo Millennium, and Chrome. Wait a minute. Chrome?

All your Mecha are belong to us.


Being the two largest companies they're in a constant battle for supremacy. This of course gives a mercenary organization by the name of Ravens' Nest the perfect opportunity to cash in on the competition. This is where you come in. Of course, they don't just let anyone in. After you choose the name for your pilot, get ready to be sucked right into the action because the game starts off with a test to become a Raven.

The main menu consists of the garage, top ten Raven rankings, email, missions, the shop, and system data. In the garage you can modify your current Mecha, assembling different parts you can purchase from the shop, giving it a paint job, etc.

Selecting the gun titled Missions will give you a list of jobs, showing you the award money for each signifying its difficulty, and the missions you perform will advance the story accordingly. Some missions offer bonuses and others threaten deduction if certain terms mentioned in the mission briefing are not met. At the end of each job you do you'll see a screen which lists the awards, cost of the mission, your balance, and then the total of money you have remaining. Ammunition and parts, as you would imagine, are expensive so the more ammunition you use up, and the more damage you take, the more cash that is deducted from your pay. It's basically like winning a million dollars on a game show, by the time you're finished paying taxes on it you have half of what you started out with.

Now, it is possible to get into debt with this game. Once your cash starts going into the negatives it's a good idea to start selling some parts in the shop to help you get back on your feet. If you die during a mission you won't get a Game Over right away, but you will lose money. With each mission you succeed your success rate goes up, points are gathered and you may even find yourself on the top ten Ravens list.

Story is mainly told through emails and mission briefings. There are very few FMVs throughout the game and the few that are there aren't anything spectacular. The opening FMV that plays before the title screen is pretty much the only one that's worth watching.

On top of Scenario Mode the game gives us a VS Mode for two players play, but it isn't anything great. Basically, you just set up your Mecha, choose your stage and battle against each other on a split screen.

There's a problem with the graphics on a level which only becomes apparent on missions where there's a secret access. The only hints you get to a secrete passage is through cracks on the walls, or by seeing it from a side view. Problem is, with the graphics the way they are there are times where you see lines in walls that leads you to believe there's a secret passage when there isn't. Aside from that though, graphics are what you can expect from 1997.

The game has a tendency to lag during stages where you have a lot of enemies on screen. It's not the worst lag you'll ever experience in your life, but it still has a risk of getting you killed.

Despite its flaws, Armored Core offers an enjoyable gaming experience and the fact that you never see your main character, or any humans at all really, allows you to become that character and imagine yourself inside the Mecha kicking ass! If you're a fan of third person shooters, giant robots blowing stuff up, and/or letting your imagination run wild, I would recommend giving Armored Core a go.