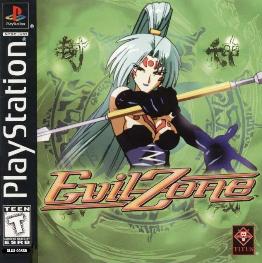 If you don't like Anime I suggest you turn back now.

Evil Zone, Eretzvaju in Japan, is a versus fighting game developed by YUKE's Future Media Creators (best known for their work on the WWE SmackDown series) and published by Titus Software in North America and Europe.

It should be noted that the game is not based off any existing Anime. The game is simply Anime inspired. More on that in a moment.

After starting up the game it opens with some narration by Paul Eiding (best known for his work as Roy Campbell in the Metal Gear Solid series) who also offer his voice for one of the main playable characters in the game. He tells us about the game's main villain, Ihadurca, a being capable of existing in multiple dimensions at one time. When she threatens the world of I-Praseru the inhabitants, through great cost, manages to conceal her in a confinement they call Evil Zone. Knowing that this would only be temporary, they summon warriors from different worlds to compete in a tournament to determine the strongest fighter that would challenge Ihadurca to the death in Evil Zone.

Why don't they just summon an army?

Once the beginning narration is over we get an animated montage of all the characters in the game and they are as followed:

Danzaiver: “The power of the Supreme Ruler destroys evil! The ultimate hero! DANZAIVER!” Who also looks like a VR Trooper. Danzaiver is part of the Galactic Frontier Civilization Defense System as a special inspector and is the game's self-proclaimed protagonist.

Alty Al Lazel: A sorcerer of great power, but a shy, sensitive soul who tries to appear tougher than he really is. As an native to I-Praseru he opposes the summonings and enters the tournament to take out Ihadurca himself, even though he seems to be responsible for the summoning of most of the main characters. Oops.

Keiya Tenpouin: Keiya of Tenpouin Clan. A mysterious and dark soul with great fashion sense. He's entering the tournament because he wants to take Ihadurca power and use it to resurrect a lost love one call Himika. Aww! I guess he isn't so bad after all. You know, when he's not stepping on your head.

Erel Plowse: You know that Anime character where the first aspect of them you notice is their breasts? Say hello to Erel Plowse! Although to be fair, by Anime standards her breast size aren't really all that abnormal. Erel is a Mercenary with a suit of living armor (that's right, I said LIVING!) name the void, who has a love interest going on with Al, which of course is the reason she wants to enter the tournament and defeat Ihadurca to impress him. Because nothing says “I love you” like killing a woman! No really, what the hell?

Midori Himeno: Well, no Anime-inspired game is complete without a Martial Artist! Midori is a passionate young grappler who attends the Fuin Martial Arts School in Japan. Always seeking strong opponents to fight, Midori jumps to the call of competing in a tournament where she has a chance to face an extremely dangerous and powerful supreme being that could kill her! Seriously, what is wrong with the females in this game? Is there not one sensible female character? 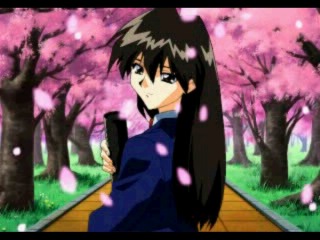 Setsuna Saizuki: Is a college student who shares her body with Karin. A kind of spirit being that only Setsuna can see and gives her supernatural powers. Unlike Erel who enters the tournament to impress a boy she likes, and Midori who's just looking to show off her fighting skills, Setsuna is lured to Ihadurca through an unknown connection between her and Karin which is revealed in her story.

While the English version claims she's a college student it should be noted that in the Japanese version she was a 14 year old girl. I can only suspect that the change was due to all the various panties shots you'll see of her during game play. She's not the only character in the game to get an age change, but hers is a bit more notable since well, she doesn't look 21 at all.

Gally “Vanish” Gregman: Then we have our Bounty Hunter, Gally “Vanish” Gregman, voiced by Paul Eiding. He's pretty much the large powerhouse of the game and his motivations for entering the tournament is quite simple. He was hired and paid to do it. Despite being a well-accomplished Bounty Hunter he's a good person at heart who loves his wife (yes, he has a wife, and a dog, and a wee bit of a drinking problem) very, very much.

Linedwell Rainrix: Say hello to the sociopath that only a mother could love. Linedwell Rainrix, Lie for short, is a psychopath who wants to become a metal rock musician. Naturally. In his possession is a magic sword that goes by Shahal (meaning Lucifer – god of the morning star) who is enemies with Keiya after killing his lover.

Kakurine: Kakurine is a priestess over 10,000 years old, but lives beyond time and in the body of a little girl. She even goes as far as to act like one, but her voice will hit puberty faster than you can say YUGIOH! Kakurine has transcendental powers and is one of the tougher opponents in the game, normally found near the end of each Story Mode before you finally reach Ihadurca. Why she chose a body of a little girl is never fully explained, but at least she isn't spending all her time in a school.

Ihadurca: Last, but certainly not least, The Absolute Existence, Ihadurca! Not much back story is offered of her from and since I want to avoid as many spoilers as possible you'll just have to play the game to find out more.

With the montage complete we are brought to the main menu of the game which consist of four primary modes: Story, One Player Battle, VS, and Survival, with a Practice mode near the end.

Story Mode: Every character in the game has their own unique story that is presented in the form of a TV show. After the preview we're given a pre-match and post-match clip with the character you're fighting. Since there are only ten characters there are only ten episodes, meaning you face a copy of yourself. The end of each story isn't anything amazing though, it's done in Japanese animation but the animation is silent and often interrupted by the credits.

One Player Battle: This is basically Story Mode without the story. If you like the classic arcade feel of a fighting game this is the mode for you.

VS Mode: Challenge a friend and pick one of eleven stages available to you in VS Mode. Ten stages belonging to their respective characters, with a background song that is their own personal theme, and the eleventh stage basically being the training stage used in Practice Mode. The game is only two players, so if you have more than two people you're gonna have to take turns.

Survival Mode: Basically what you would expect it to be. Choose your fighter and then take on as many enemies as you can before dying.

Every character can charges up their health bar causing a red crystal to appear that acts as your finisher. Every character has one. The whole animation (not drawn) for the finish will only be shown if the opponent's health bar is low enough for them to be taken out with the move.

There is no regular jumping performed in the game, but you can perform a jump attack. It's a simple control system where you don't have to worry about complicated combos to perform certain moves. I'm looking at you Mortal Kombat!

The biggest con in the game is basically the dubbing. It's godawful! Some times it isn't so bad, but other times you can see the character is clearly still talking even though no sound is coming out of their mouth. It's just distracting and takes you out of the story.

Another flaw is that the story can be a little hard to follow at times. Some of the characters will start talking and offer little to no explanation on what they're actually talking about. You'll have to read their bio if you want the full story.

Overall, whether or not you'll enjoy this game comes down to one simple question. Do you like Anime? If you're a huge Anime nut then chances are you'll enjoy this game. If you're not a fan of Anime, if you don't enjoy it at all, then your chances of liking this game are rather slim. You may or may not enjoy the actual game play, but as far as everything else is concerned? You're probably not going to like it. So, if you're a huge fan of Anime and/or fighting games in general I recommend checking it out.