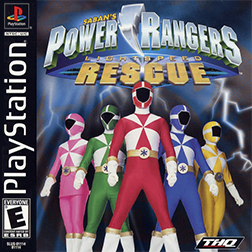 By 2000 we had Power Rangers: Lightspeed Rescue, adapted from Kyuukyuu Sentai GoGoFive. The video game was to come out in June and give us the ability to control all five Lightspeed Rangers with the Titanium Ranger being the secret unlockable character. We kick things off with the intro to the show before going to the title screen. Get used to having the Lightspeed Rescue theme stuck in your head because you're going to hear it a lot.

At the start of each stage you'll be shown a series of clips taken from the live action show. Before you can get to the action however, you receive a quick mission briefing by your commanding officer, Captain Mitchell and Miss Fairweather. The information they give you can be repetitive.

It's your pretty basic beat 'em up. You punch, block, etc. Until you clear an area you're unable to move on to the next one. The weird thing about that is even if it's telling you the area you're in isn't cleared, you can still trigger the next mini boss fight, but won't be able to reach him so he'll just be standing there. If the area isn't cleared why have the mini boss appear at all?

The game allows for single or multiplayer with your usual difficulty settings. What strikes me odd about the difficulty in this game, is that if you choose easy you don't get every level in the game. It leaves out the final level. It reminds me of Castlevania 64 where if you play it on easy you only get five of the ten levels in the game. This one isn't as bad as that, but why leave out a stage based solely on the difficulty setting? I understand wanting people to beat the game on a stronger difficulty in order to unlock something, but don't leave out a part of the game entirely because of it.

One positive note about the game is if you're a fan of the show, it has all the actors reprising their roles for the voices so it really does make you feel like you're a part of the team. This is more or less really a game for the fans of the show, if you're not a Lightspeed Rescue fan at all this isn't a game you're going to enjoy. Despite everything, it's not the most challenging game you'll ever play either, even on Hard Mode I was still able to beat it on my own without too much of a fuss. If you're one for challenges you wouldn't be getting too much here.

Power Rangers: Lightspeed Rescue is just a fun game for fans of the show to enjoy, but that isn't to say someone out there who's never heard of the show couldn't enjoy it. If you enjoy platformers, action, and beat 'em uppers, then you may very well enjoy this game regardless.

In other words if you have some time to kill, IT'S MORPHING TIME! LIGHTSPEED RESCUE!

No, they don't really say “it's morphing time” beforehand, but wouldn't it be so much cooler if they did?