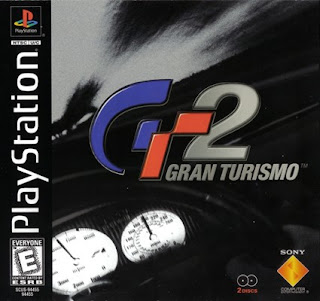 Gran Turismo 2 is a driving simulator/racing video game developed by Polyphony Digital and published by Sony Computer Entertainment following the success of Gran Turismo. The game swept stores in both Japan and North America in December of 99, and finally Europe one month later and has received commercial and critical success. Today we take a look at the sequel that came racing onto the scene!

As you can see above the game comes with two discs. Arcade Mode to dive right into the action, and Simulation Mode to take you inside the life of a racer. For this review we'll be starting with:


We start off with a series of racing footage from the game to the song My Favorite Game by The Cardigans, before coming to the title screen. Arcade Mode brings us two different types of racing: Road Race, which is done on your standard race track, and then Rally which is performed on a dirt track. In Road Race you have three classes to choose from which consist of Sports Cars, High Performance Cars, and City Driver Cars. After picking a class, select your car, pick your color, and you're ready to go.

Right off the bat you have three tracks to choose from: Tahiti Road, Midfield Raceway (which is the longest of the three), and High Speed Ring. There are over 20 tracks in the game overall, but this is just what you start out with. In Rally, the only track you have at the get-go is the Tahiti Dirt Route 3.

Another mode we have is called Time Trial where you race against the clock for the fastest time. What makes this bit interesting is the ghost car, which is basically a mirror image of your time from the last lap, representing that you're basically racing against yourself and that's pretty cool.


We get right to the title screen on Simulation Mode and immediately the first thing you'll want to do at the start is purchase a car. With over thirty manufacturers to choose from you can go to either north, west, south, or east city. You won't have a lot of money at the beginning, so the best thing to do would be to look at used cars. After you have a car it might be a good idea to get a license. You'll have to undergo several different test scenarios, but once all of them are complete you'll have your license and you'll be ready to race.

Once you get to the Go Race menu you'll have three options. The first one will be your GT League, which is the official championship races for racers all over the countries, Rally Events, which are races performed on unpaved roads, and then Special Events, which include endurance races and races limited to specific model vehicles. Like any good racer you need to keep a close eye on your parts. In Car Settings you can change parts on your car or adjust them accordingly.

Other things you can do in Simulation Mode include buying rims for your car at the Wheel Shop, keeping your car clean in Car Wash and testing out your car performances in Machine Test.

Another neat feature is the instant reply that you can watch at the end of every race. While the replay is going on you select which car you want to follow. In addition to that you can save, copy, load, rename, and delete replays after they become available.

Overall, I don't have many complaints about Gran Turismo 2, and it's easy to see why it's one of the top selling titles of the original PlayStation. If you're a fan of racing, or just looking for a racing game to get started on the genre, Gran Turismo 2 is definitely a video game I'd consider looking more into.