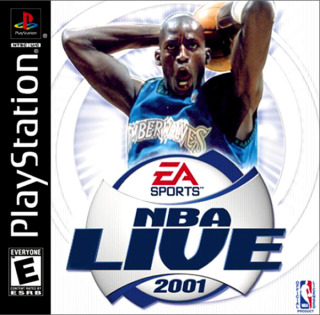 NBA Live 2001 is part of a series of video games based on the NBA, now known as NBA Elite, developed by EA Canada and published by EA Sports. In case you were wondering, that's Kevin Garnett of the Minnesota Timberwolves being featured on the cover. The game has all available NBA teams on the roster, including some specials like Western, Eastern, 50s, 60s, 70s, 80s, and 90s All Stars, and you can even make your own.


We open up with a musical performance by Montell Jordan. Don't know who that is? Yeah, me neither. First up on the main menu is Exhibition. Pit your favorite teams up against each other and set the difficulty and time limit. It starts with all the usual basket ball rules you'd come to expect, but you can edit that at your own discretion. For example, if you're like me you can turn off all the rules and have an anything goes game where you can shove players as much as you want. You won't see that in the NBA (warning: shoving people could cause minor to severe injury, do not shove anyone at anytime).

Then you have your Season mode directly under that where you can take your team all the way. Let go Kansas Jayhawks–! Oh yeah...

In Season mode you can choose NBA (which includes all 29 NBA teams) or Custom which allows you to modify the season accordingly. You can select anything from 4 to 29 teams. You can also enable CPU trading where the computer propose trades with other teams. Schedule types goes from 2000, 2001, and completely random. Other features include season length, playoff length, importing rosters and importing created players into the season mode.

You can always head straight to the playoffs with the NBA 2001 Playoffs mode. Just set your settings, pick your team and go from there. Then we have 3 Point Shootout pitching two players against each other. They can even be from the same team. I played as John Stockton against Shaquille O'Neal of the 90s All Stars. He was terrible. Only got three balls into the basket. That'll teach you to make Steel! Each ball into the hoop is worth one point, except for the last one which is called rack-the money which is worth two points.

Then there's the 1 on 1 mode where you go toe to toe with the man, the myth, the legend: Michael Jordan! (YAY!) But you can't play as Jordan until you unlock him (BOO!). Until then, enjoy kicking his ass all over all that parking lot! Although, keep in mind you aren't limited to just playing against him. You can go 1 on 1 with any of the available players in the game.

Practice mode speaks for itself so let go to one of my favorite parts in the game. Making your own team and players. You only have room to make four teams which are listed as Custom A, Custom B, Custom C and Custom D. You can toggle through logos then type in the name of your city and the name of your team. It starts off empty so you'll have to fill your position which can be with either legends, players, or custom players.

In Create a Player you type in their first and last name. Select a team or free agent, a bench position, the position they start out with, whether or not they're left or right handed, the number on their jersey, appearance (which isn't that great I'm afraid) and stats. When you're done press enter to make it official. I took advantage of these options to give Kansas City its very own NBA team: the Kansas City Jammers (A jackhammer was their team symbol).

In conclusion, NBA Live 2001 is a great way to pass the time especially if you're a basketball fan so I'd recommend giving it a go.