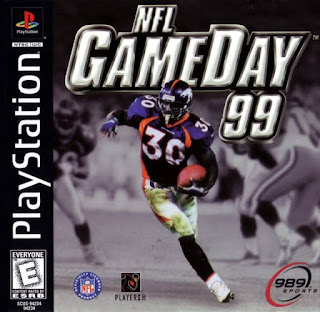 NFL GameDay 99 is part of a series of NFL games developed and published by 989 Sports. This lasted for ten years from 95 to 05 before ending due to a decline in popularity. NFL GameDay 99 would actually be the first game in the series to take on a more Madden inspired approach while Madden went to polygon technology, and of course there are times where change is good and change is bad. I won't go any further into that as I want to judge NFL GameDay 99 on its own merits instead of comparing it to the rest in the series.

After a grand opening splice of live football footage, we get to the main menu, which is different than most. Straight away what we're given is a mode for gameplay, level of difficulty, style of play, and how many minutes will be on the clock. Mode gives us Preseason, Season, Custom Season, and Tournaments. Difficulty settings goes from Rookie, Veteran, All-Pro and Hall of Fame. Style of play consist of Simulation, Total Control for a more advanced style of play, and Arcade for fastest style of play.

Then you have your Roster menu. Here you can view each team's roster, create your own player and draft them to any of the available teams or make him a free agent, trade players from each team, draft players, sign players from the free agent pool, release players, or reset the roster to reverse any changes you made.

Prior to the beginning of each play you'll be brought to a screen that allows you to choose which play you want your team to go with. If you're like me and don't know the first thing about what play does what you're in for some trouble. If you're well versed in the game of football then this gives you a chance to carefully strategize.

Pause the game during play and you'll be able to view game stats, view an instant replay, call for a time out, cycle through camera options, substitutions, choose audibles, customize your game. or quit. Audibles have to do with plays and team formations.

Scoring a touchdown will earn your team six points, you can get an additional one immediately afterwords which is normally where you go for a field goal, but if you don't know what the play is you can't do that and you're not forced to go that route. You can try another play to score that extra point entirely. Field goals that are not performed after a touchdown are worth three points but be careful when and where you go for a field goal kick. There's a high chance of interception.

Season Mode allows you to play as your favorite football team in a complete 16-game NFL Season. You'll go through a schedule where you can play games or simulate them, and at the end your team will enter the playoffs and even have a chance to play in the Super Bowl.

You can take control with Custom Season to reorganize the teams in each division from both conferences. Custom Season works the same way as regular Seasons, but with your preset changes made before the Season officially starts.

The NFL GameDay series may be a thing of the past, but that isn't always a bad thing. If you're a fan of the NFL, or just enjoy sports in general, I'd recommend NFL GameDay 99. This is ToriJ signing off.