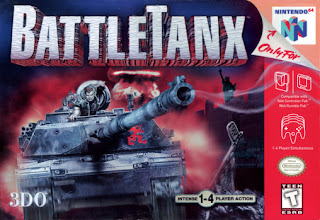 Today I'll be doing something a little different. I'll be reviewing my first Nintendo 64 game. BattleTanx is an action game developed and published by 3DO, an old video game company founded in 91 and defunct in 03.


The game stars Griffin Spade, a residence of Queens, New York. Some times after proposing to his true love, Madison, a virus wipes out 99.99% of all women.

My god, 99.99% of women wiped out? I don't even know what to say to that. What kind of an evil, sadistic monster would want to do something so terrible to women?

I should have known.

Martial Law is declared as everything goes belly up and Madison is taken to Sans Francisco alongside other surviving women by the government, and so Griffin Spade (with a tank he just happens to come across at Tanks R Us, I guess), sets off across states line to be reunited with his one true love!

All right, in addition to our single player Campaign we have Annihilation where up to four players can battle it out with an army of five tanks where the last man standing wins. Then we have Battlelord, where the goal is to capture the enemy's Queenlord (a title given to a woman of high regard) and bring it back to your base. In other words, capture the flag, and that's what BattleTanx comes down to folks. Men, with tanks, blowing each other up over women in a post-apoplectic world. Gotta love it.

Deathmatch is where the first to kill seven is declared the winner, and Family Mode is like a Deathmatch, but ammo can't be switched. Now that we've gone through all the modes let go and select our team.

The first screen to come up is Team Alignment, allowing you to pick how many teams there are, what color they are, and then once decided you can choose up to nine gangs: Griffin's Army, Urban Decay, Charlie Company, After Shocks, Dark Angels, Nuclear Knights, Mech Maniacs, Skull Riderz and the Psycho Brigade. In Campaign you will only be able to play as Griffin's Army.

There are three tanks total you can choose from in the game. The Moto Tank, the M1A1 Abrams MBT, and the Goliath. The Goliath tank is just as the name would suggest, a giant that packs quite the punch. Not every gang will have all three tanks available. The Nuclear Knights for example would just be made up of Goliaths.

Occupied Territories in the multiplayer modes consist of Queens, Time Square, The Area, Chicago Lake Shore, Chicago State Street, Las Vegas, Area 51, and of course, San Francisco. Every gang has a special item when starting out a stage and you can find more from exploring.

There are 17 levels total in the game's Campaign and not much in terms of storytelling. You'll have your storyboard accompanied with still images and gameplay, then words on the screen at the beginning of each level giving you bits of background information and your mission objective. To be fair they do explain how the tanks are built.

BattleTanx presents a fun and enjoyable experience that gamers can enjoy, and seeing that I have spent hours on the game myself, I'd recommend it if you're interested. Although, if you've played BattleTanx Global Assault for the N64 beforehand you may find the first game underwhelming.