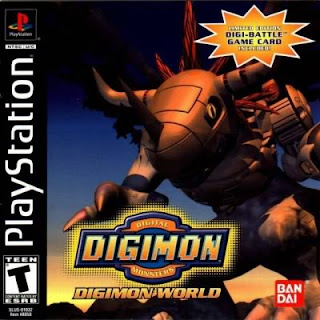 Developed and published by Bandai (reprogrammed in the US by Flying Tiger Development) is Digimon World for the Sony PlayStation, the role playing, digital pet game based off the Digimon media franchise created in Japan. Not to be confused with that other Japanese series.


We start off with a scene showing children playing with their virtual pets devices, hooking them together to do battle. From there we see the face of our main character, a little boy called Hiro, excited to see the Digimon battle play out. Meanwhile, we're briefly pulled into the parallel world of Digimon to see the two Digimons in all their glory battling it out for supremacy before being brought to the title screen.

Let's go with New Game, and right off the bat I have an old guy named Jijimon (wait, people names end with Mon too?) asking me about myself. Well, I'm actually a male who enjoy writing video games, short stories– Oh, you meant my character. Okay.

Jijimon: Do you have a Digivice?

A Digiwhat? I'm going to play it safe and say no.

Jijimon: I see. Do you have friends?

Yes. In fact, I used to be surrounded by them, but then they all moved away so now all my friends come from the Internet.

Don't you judge me, midget!

Did I stutter? What, I actually have to confirm that's my name? Yes, because so many people type in the name they don't want to use while playing. You guys are being WAY too considerate for indecisive people!

Anyway, it proceeds to ask you for your Digimon's before bringing you to another cut-scene with your character returning home. You're led to your virtual pets device, which they do call a Digivice, waiting for you in your room. Your Digivice is responsible for bringing you to the parallel world you play in for the rest of the game.

You wake up to find yourself surrounded by Digimon, who are delighted to see a human for the first time (so Jijimon isn't a human? But he looks just like one – nvm). After a bit of back and forth, you're introduced to your Digimon.

Jijimon explains that the world is in danger, and that once upon a time in File City the place was flourishing of Digimon of many different types, but they've gone away and is asking for your help to bring them back. At the end of the conversation your character will run out of the house ready to save the world! Now, go back in and talk to the Digimon there because there's items you're gonna want.

If those of you like to be more interactive in battles, prepare to be disappointed. It's more watching than actually fighting like one could expect in Monster Rancher, or Pokemon. When a Digimon Finish Gauge is up you can perform that Digimon Finishing Technique.

A Digimon has four stages to its evolution, which is titled Digivolution, and they are In-Training, Rookie, Champion and Ultimate. How you raise your Digimon will affect what they will digivolve into and keep in mind that they will age by one year every 24 in-game hours. Care Mistakes, Weight, and Parameters are key elements that affect their evolved form.

In addition, if you want to battle one on one with a friend you can save your Digimon's data for the Battle Mode. Battle Mode has a Single Battle for one on one fights and Team Battle for three on three and five on five battles.

All in all, I can conclude that Digimon World is definitely a game for Digimon fans, so if you like Digimon I recommend checking it out. If you never heard of Digimon before, but enjoy a game where you take care of a creature/animal then you may also enjoy this game, assuming (Digimon fan or no) you don't mind having to run to the bathroom every so often, in-game.