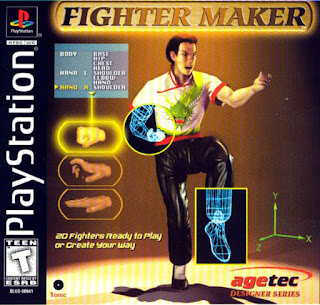 Developed and published by Agetec, Fighter Maker hit stores in 1999 offering what was a unique concept at the time. Giving players the ability to create their own fighter and their own moveset. Despite this, the game performed poorly, so how could a game with such promise go so terribly wrong? Let's find out.

The game starts right off, taking you to the title screen. From there we have our main menu which consist of Normal Mode, VS. Mode, Options, and of course Edit Mode. Nice, keeping it simple. After clicking on either Normal or VS. Mode we have our Character Select screen and introducing the fighters of Fighter Maker:

NONE of these characters are given names. Not one. You go to select one and enter a fight you won't see a name above their health bar. As far as gameplay goes this has to be the most boring fighting game I have ever laid eyes on. Not to mention, repetitive. On top of that, the characters all look bland, they sound bland, and the areas look bland. By stage three I was already bored with it, by stage five I just had to get away. Time to see how well the Edit Mode holds up.

Profile: Well, this is pretty cool. You have nine slots to fill up: name, hometown, birth date, sex, blood type, hobby, occupation, fighting style, and creator. I'm assuming creator is asking for the creator of the above fighting style. All right, let's make a fighter:

Now we go to body to work on appearance and see... We're limited to the 20 default fighter models and can't customize them. Not even color. That's disappointing. Guess I'll have to settle for the cute Japanese girl in blue as Maricul's base.

Then you have your motion, basic movement, hits, etc. Each has a preset list available you can edit. This is where things start to get complicated, and if you don't have patience, I suggest finding another game.

For motions we have sequence numbers, numbering each sequence which can also help later on with combos. Three buttons are at the top next to the sequence number which are motion, config, and name. Motion takes you to the menu to create your movement, config sets the command to launch plus how much damage it inflicts, and attack names. There's also a timer on the bottom right of your screen to show you how long the movement runs.

While on the motion editing screen you can display or hide the Controller Bar. What the Controller Bar does is allow you to control the flow of the motion you're creating. The buttons are just the kind of things you'd expect to see on a remote, with copy at the end for duplicating a pattern.

You can modify each individual pattern in whatever motion you're creating. P stands for pose, F stands for Frame, W stands for Wave (selected speed for a body part) and the Z, X, and R at the end are for setting the coordinates of the model's range from the beginning to the end of the motion.

Then you have Logic and Test. Logic is setting up movements that would be used in battle between computer controlled opponents in a variety of circumstances. Test mode is just that, a way to test your newly created character when they're finished.

As you can expect, it's a time consuming process which can take hours, but that wouldn't bother me as much if it was a worthwhile investment. The reason this game fails is because there is hardly anything left to do once you finally make a fighter. You have two modes and that's it.

Would I recommend it to gamers? Well, that depends. Do you like fighting games with actual characters that have back stories? Fighting stages that are pleasing to look at? A handful of modes to play around in? If you answered yes to any of those questions then don't get this game! Because it's not going to offer any of those things. It's a fighting game that tries to be unique through its Edit Mode, but then forgets to be a game!