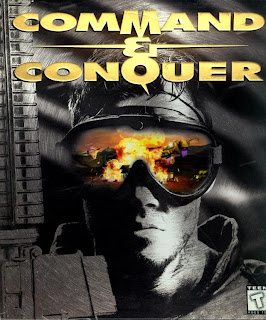 Command & Conquer is a real-time strategygame developed by Westwood Studios and published by Virgin Interactive. It originally came out in 1995 for the Windows PC and was later ported to home consoles.

The game starts off with an opening cut-scene that honestly feels like a man flipping through channels on his TV. We get several news broadcasts to introduce us to the world with some added bits mainly played out for comic relief. Like this infamous bit:

The opening intro ends with a screen of static with the symbols of the two primary factions fading in out and on the screen. These two factions are the Global Defense Initiative and the Brotherhood of Nod. GDI is a military branch of the UN tasked with defending the world from global terrorism. The Brotherhood of Nod is a religious based terrorist group led by its charismatic and enigmatic leader, Kane.

The plot centers around the arrival of a new energy source named Tiberium, a green crystalline substance that is both dangerous to humans and is your army's main source of currency.

After you select your faction of choice you cut to a briefing by your commanding officer. These scenes are live-action and performed by trained actors. They're done from a first-person perspective in order to further immersive the player into the story. Once FMV ends we get a CGI cut-scene for the outside areas, but still possesses the inclusion of real life people in place of the soldiers.

To get power to your base you need a Power Plant. In order to train troops you need to build a Barracks for them to train in and then a Refinery in order to harvest Tiberium. As you progress through each campaign you will have access to more buildings and units, and while GDI and Nod both have their own unique styles to them, it's roughly the same format for both.

The game is also packed with a pretty good soundtrack. Given its genre Command and Conquer is as much about patience and picking your spot as it is about destroying your enemies. You're going to want to build your base, train your soldiers, march out into battle, and have a game plan going in, and then a backup game plan for when that plan blows up in your face. It's a lot like chess in that aspect. Enemies can sneak up on you and some time you have to target them with the mouse in order to get your units to attack, but most of the time when they get close to your guys your guys will start firing at them automatically.

One of the things that Command and Conquer stands out for when it first came out was the explosions in the cut-scenes, and the fact that in one of the live action scenes we see a man shot point blank in the head by Kane. Back then something like that still wasn't all that common in games as we were just coming out of the 2D era. CnC probably has one of the most underrated stories in video games, going from a modern time military game to a SciFi adventure as soon as its sequel Tiberium Sun came out. Even in the first game the struggle between Nod and GDI is seen throughout, fighting over Tiberium, and there is even betrayal inside the Brotherhood.

The game can be a bit dated, but it was designed with Windows 95 in mind, and depending on your specs it may not play as well as it would on other computers. It's also not that easy to find unless you look for Command and Conquer the First Decade. The gameplay is enjoyable, and the story is a lot of fun. If you can look past how old it is then I would recommend the game to any RTS lover out there.

Great shot! Return to base immediately.
Posted by Ayen at 2:10 PM