The franchise that defined an entire generation. Back in the late nineties you couldn't spit without hitting a kid who was either playing Pokemon, or talking about Pokemon. It was everywhere, in games, on television, movie theaters, albums, card games, toys, stuffies and stickers! Even if you didn't play games chances were you knew what it was and it's still going on to this day.

We went nuts about it as kids, we still go nuts about it now and our parents scratch their heads and just shrug their shoulders. As long as we weren't drinking or smoking they didn't care. So, with Pokemon Omega Ruby and Alpha Sapphire right around the corner, I thought now would be the perfect time to go back to where it all began. With Pokemon Red and Blue! 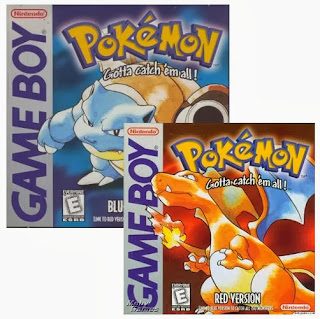 Pokemon Red and Blue (originally Pocket Monster Red & Green in Japan) is a role-playing video game where you take control of a ten year old who catches and trains Pokemon with the goal to become a Pokemon Master. We start off with a greeting from the Pokemon Professor, Professor Oak, who introduces you to the world of Pokemon. From there, we see our main character (Red) who the player can decide to name whatever they want. Default names include Red, Ash, and Jack. Once we name him Oak introduces us to the grandson, your rival, whose default names include Blue (weird name), Gary, and John (the default names being reversed in the Blue version). Then we're taken to the starting point, your house in Pallet Town.

Once in a battle you have four options available to you: fight, change Pokemon, use an item, or RUN! Each new Pokemon you catch has at least two attacks at the start before they learn more, and a Pokemon can only learn four moves. They'll learn more attacks as they grow stronger and level up, but for more specific attacks you can use a TM or HM item on them if they're applicable to learn the move. Pokemon attacks can either do direct damage to an opponent Pokemon, or bring down their stats allowing you a bit more strategy. Like for example, using growl would lower an enemy Pokemon's attack and cause it not to be able to inflict as much damage in its next move. and a tail whip would lower their defense allowing you to cause more damage.

You can change your Pokemon at any time during battle, and will only be forced to change when a Pokemon faints. If you run out of Pokemon, you lose, and your next stop is the Pokemon Center. Most other trainers you face in battle usually only change their Pokemon after you defeat one, with the exception of Agatha from the Pokemon League, who uses it as a battle tactic. I really hate her.

Should your Pokemon's health go down, or you're poisoned, etc. and you got the appropriate item, then you can access these items at any time during battle to cure your Pokemon, although it costs a turn. You can also tuck your tail between your legs and run at any time (unless you're fighting a trainer), but be warned, there are times where running away won't work which also means you lost a turn.

The game plays like any other RPG, only with random battles being limited to tall grass areas, and you working to level up your Pokemon instead of your human character. When your Pokemon reach a certain level, they'll evolve into their next stage, except Pokemon who can only evolve using an elemental stone. Be warned however, that if you don't have a certain amount of badges by the time your Pokemon evolve they may not obey you. Badges brings with them respect, and the more respect you have, the easier evolved and traded Pokemon will obey your commands. My advice? Don't spoil your starter.

The big innovation of the game is the ability to trade Pokemon and battle other players via a Game Link Cable you plug into both Game Boys. Since the real main difference between Pokemon Red and Blue are the Pokemon available in certain regions, trading with others, or yourself, is critical in order to collect all the Pokemon. A plus to having both versions of the games comes during parts where you have an either/or choice between two items you can get, like fossils that can be used later to clone an extinct Pokemon, and it can also allow you to try out two different starters at a time. Speaking of starters...

You have three starter Pokemon to choose from to begin your adventure: Bulbasaur, Charmander, and Squirtle. Grass, Fire, and Water. Which Pokemon you decide to go with will affect what your rival will choose as he'll always go for the type that is strongest against yours. Despite having an early advantage against the first three gym leaders, Bulbasaur is actually the hardest to train between the three. On the flip side, Charmander and Squirtle can be easier to train, but don't have the same advantages at the start, Charmander obviously being the hardest as it has no real advantage over rock. However, level can also be a deciding factor in a battle, not just type. You can always catch and train different Pokemon for the task of defeating a particular gym leader. At the end of the day your starter comes down to you and your own play style.

The biggest setback of the game are the glitches. Some of them are harmless and even fun, like the Mew glitch, while others, such as the infamous Missingno can cause the screen to scramble and mess with your save. It can even get bad enough to where you have to restart your game in order to fix it. Should you encounter a Missingno, and have your graphics scrambled, looking at the stats of another Pokemon usually fixes it.

Psychic Pokemon are broken in these games causing the difficulty to severely decrease when using them, or increase when they're used against you. An experienced player can probably find ways around this if they have the right strategy going in, but overall they are way too overpowered, and the types that are supposed to be good against them don't bold as well as they should. It doesn't help that most Bug Pokemon are part Poison, and Poison is weak against Psychic. Mainly, the best counter to a Psychic Pokemon is another Psychic Pokemon. or having a really strong Pokemon to stand up against them.

Another thing to consider is, while Pokemon Red/Blue were great for their time, they're both pretty dated these days. If you've played the newer gens they can be pretty hard to go back to. Once the nostalgia wears off, they just don't hold up as well as they once did, and you'd probably be better off investing in FireRed and LeafGreen for the Game Boy Advance if you want to enjoy Gen I.

If you're a fan of retro gaming, or if you can look past dated graphics and game mechanics, then I would recommend Pokemon Red and Blue to play if you enjoy RPGs. If you can't look past these things then I would suggest giving these a pass and to look into the remakes if you're used to the newer games.