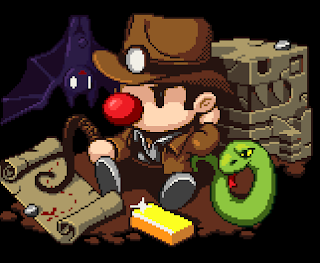 Developed by Derek Yu and made available by freeware, Spelunky is an Action-adventure, Platformer and Indie game for the PC using the Game Maker engine. You star as an unnamed adventurer called a spelunker inspired by Indiana Jones, and a clown apparently, setting out to explore an underground dungeon. Derek Yu would go on to own his own company and find another developer by the name of Andy Hill to develop an updated version now available on the Xbox Live Arcade. Today, we'll be taking a look at the original game.

We open up with a black screen and some words from our spelunker before seeing him walk through a desert at night. Bats fly past him above in the sky and he stops at the entrance of a tunnel that he uses a rope to descend, bringing us to our title screen. 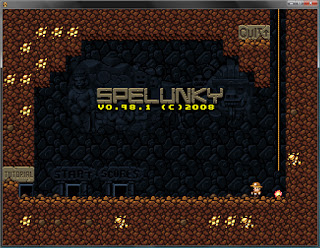 I gotta say, only at the title screen and I'm already impressed. Instead of just a generic start, score option menus, we get an interactive screen that introduces us to the gameplay and background music right off the bat, having each area as a doorway while climbing the rope allows you to quit the game. When you first start it's just the two doorways Start and Scores that you get first. Going into Start sends you to the Tutorial which later becomes its own doorway that you can access at any time like seen above.

I hope you enjoy dying because you're going to be doing a lot of it. I feel like Kenny McCormick playing this game. If that wasn't bad enough there are no extra lives, no continues, and if you want to replenish your health you have to find and rescue a damsel in distress and take her to the exit of the level. Once in-between levels being shown your score, she'll give you a kiss which turns into an extra heart. Women, can't live with them, and you certainly won't live without them.

The reason this is is because Spelunky takes elements from the roguelike genre, which is known for randomly generated levels, lack of save points, discovery mechanics, and a whole lot of dying. What this means is the levels are chosen completely at random and you start off in a different location each time. The name originated from ASCI text-based computer game called Rogue, where you play a rogue and wander around a dungeon killing monsters and looting treasure.

The term has been watered down as originally a roguelike was anything based on rogue's game engine and design until nowadays any game with randomly generated levels and high difficulty is called roguelike. This can be very confusing for new players if they aren't familiar with the system. Originally, I thought the game did have continues and were picking up where I left off after dying, but no. When you die that's it, you have to start the game all over again.

The game plays like your typical 2D sidescroller with enemies ranging from spiders, skeletons, cavemen, ghosts and the most terrifying creature of them all... SNAKES! 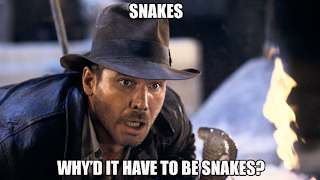 In addition to enemies, you also need to keep a look out for traps. These can range from arrows, to giant boulders, and trust me you'll know when the boulder is coming when you see the Gold Idol on your screen. I've seen too many Indiana Jones movies to be punked out by some boulder. The second you pick up the Gold Idol and the room start to shake, run!

You start out with four hearts in the game, four hits and you're dead. Unless you run into an instant trap like falling on spikes or being ran over by the boulder. Oh, and do be weary of your items at times when you use them. After setting your bomb to blow get as far away from it as possible, don't just think staying a few steps away will keep you safe. If you're in its range you're going down. If you're holding something, like say a skeleton head, mind where you throw it. I once threw it only to have it rebound off the wall and hit my guy in the head killing him. There are ways to avoid instantly being killed by the spikes, however. If you crouch and crawl over a ledge you'll slide down through them harmlessly, and if you walk through them or jump into them you're fine. Descending too quickly into the spikes is when you're as good as dead, as logic would dictate.

A major part of the game is its discovery. You're bound to find a lot of interesting things each time you start a level if you just explore. For example, there are various shops where you can buy and bet on items, just be sure to read the message that appears on screen when you approach them. One false move and the shopkeeper will blow you away with a shotgun, which they fire twice as fast as the player. I even found one place where you could pay to kiss a girl, which is mainly for health, but seriously? Who sets up shops like these underground? Did I stumble upon the black market?

The game has four worlds with four levels each (the worlds will be in the same order but the levels won't be). Not including two bonus stages, so there are 18 levels altogether. There are ways to get shortcuts to further levels without having to go all the way back to the beginning when you die. At the end of the fourth level you can find the tunnelman, a one-eyed man dressed in blue that will dig tunnels taking you to the next world if you have the loot to pay for it.

Collecting as much loot as possible is the main goal of the game. You can find these through gold laying around in the level, gems, diamonds, and the Gold Idol I mentioned earlier. How much loot you get will affect your score. There are certain points in the game where your character will feel things as he travels. At the start of the level he'll some time say “I hear snakes, I hate snakes!” and if you feel a chill run down your spine and you're told to get out of there, that's when a giant ghost appears on the map and comes after you. If the ghost touches you it will trigger an instant death.

Forget what I said about Sailor Moon: Another Story being ridiculously hard, Spelunky makes that game feel like a cakewalk! There's no jerking around with this game, you have to be assertive and aware of your surroundings at all times.

The game draws heavily from La-Mulana and Spelunker for its visual styling and character design. Those two games are also the main inspiration for the gameplay and general mechanics of the game as well. La-Mulana main character is also similar to Indiana Jones, which Spelunky's main protagonist has so much in common with. You can definitely see the inspiration Spelunker had in the level design in the first four levels in particular. It feels like you're playing an old school 2D Platformer from the eighties or early nineties, so it's easy to forget that this game is actually a lot younger than that. If it came out back in the day my guess is it probably would have been for the Super Nintendo.

Spelunky features blood. Every time you kill an enemy or die little red balls of blood (which looks more like treasure) are seen coming out of you, flying around the screen before disappearing. Not just when you die, but when anyone dies. If you land on the spikes your guy shakes and the spikes are painted red. It's a lot less graphic than I'm making it sound by describing it. It's no Mortal Kombat by any stretch of the imagination. It's rated T, after all.

Spelunky is a fun 2D game with all the perks that comes with retro gaming. It has the same level of frustration that makes you want to hurl profanity at the screen, throw your controller to the ground (keyboard in this case), and keep going because you take it personally and aren't about to let the game get the last laugh. If you enjoy a good challenge, a game that requires you to use your head and explore, old-school games, and Indianian Jones, then Spelunky is just the game for you.