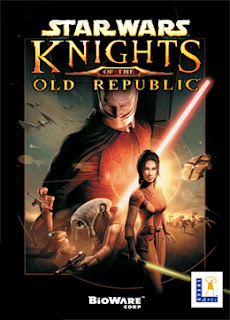 Developed by BioWare and published by LucasArts, Star Wars: Knights of the Old Republic was released on the Xbox in July of 2003 and then became available on the PC several months later. KOTOR is a role-playing game that takes place 4,000 years before the rise of the Galactic Empire where the evil Dark Lord of the Sith, Darth Malak, a former Jedi turned Sith with his master Revan, rose to power after the death of his master and launched an all out attack against the Republic. A force of which threatens to crush everything in its wake. Is it just me, or are the Sith ALWAYS the stronger of the two in these stories?

As soon as you select New Game we're shown the Character Generation menu. The game offers you three classes to choose from, available in both male and female, which are the Scoundrel, the Scout, and the Soldier.

After you choose your class and gender the next is the Character Portrait, which will be the base of what your character looks like. I'm afraid you get no real character editing in this game, just a selection of heads to choose from. BioWare wouldn't offer more options for character creation until much later.

From there we get the classic Star Wars opening crawl that gets us up to date on the plot before cutting to a Republic ship, named the Endar Spire, under attack by Malak's forces. Your character is awakened by this attack and joined by their bunk mate Trask, who informs you that the Endar Spire is under attack. Is it just me or do RPGs always start you off where you're at risk of being brutally murdered? After speaking to Trask, you'll want to get your equipment out of the footlocker nearby and then you're all set to begin the game.

Like in most BioWare games, you have the option to be a saint or a complete and utter douchebag. Certain dialog options and choices you make in the game will award you with either Light or Dark Side points. This will affect how your character is viewed throughout the game by others, also the more Dark Side points you gain your character's appearance will change until they're as ugly as sin. You start out at the default gray area when beginning the game and make your choices from there. Keep in mind that regardless of which side you choose, there will be a point in the game where you get to pick once and for all if you'll join the Dark Side or stay with the Light. Depending on which side you choose you'll get a different selection of abilities you can learn as you progress.

Later on in the game when you go through your Jedi training you'll have the option to choose three different Jedi classes. Jedi Guardian, Jedi Consular, and Jedi Sentinel. Jedi Guardian puts more emphasis on lightsaber combat, where as Consular is the complete opposite of that, having more focused on Force powers and diplomacy than in combat. Sentinel strikes the perfect balance between lightsaber combat and Force abilities while also being more prone to use dual-bladed lightsabers. The crystal you'll get to create your first lightsaber is your badge and will reflect the class you choose: blue for Guardian, green for Consular, and yellow for Sentinel. Of course you aren't limited to these colors and can modify your lightsaber any way you want once you find the proper color crystals for it.

There are three mini games that exist within the game itself: Pazaak, Ebon Hawk Gunner Station, and Swoop Racing. Pazaak is a card game where the goal is to have face up cards to add to a number total higher than your opponent's without going over twenty. If you go over twenty it's an automatic loss. The game has three sets overall you must win in order to win the match and before each game can be played a wager must be made. You didn't think you'd get to walk away with the same number of credits you had to begin with when you lose, did you? Pfft!

The Gunner Station is pretty much a shooter where you take down TiE Fighters. Imagine being Luke or Han Solo in the first Star Wars movie inside the Millennium Falcon, only a tad bit more annoying. If you want to get out alive you need to be quick and keep a watchful eye on your ship damage indicator, and your sensors. Your sensors will be your main guide to figuring out where the enemy is.

After that there's Swoop Racing. In each race there's a time limit and whoever has the best time wins. You have to keep shifting gears to keep up your speed and can ride over acceleration pads to go even faster. Overheat and you may very well explode.

No RPG is complete without its characters, so let's go over each main character available in the game.

Carth Onasi: Voiced by New York City's own, Raphael Sbarge, who would go on to voice Kaidan Alenko in Mass Effect. Carth is an experienced Republic pilot whose seen more than his fair share of bloodshed and is damaged by betrayal, leaving him unable to trust you when you first start working together. He is also a potential love interest for a female character if you're persistent enough.

Bastila Shan: Our Jedi Sentinel. Voiced by Jennifer Hale whose has done so many different voice work in movies, television, and gaming. I couldn't even being to name them all, so here are a few: Jean Grey in Wolverine and the X-Men, Naomi Hunter in Metal Gear Solid, and the female Commander Shepard in Mass Effect. Here she plays a woman with her lightsaber hilt so far up her own ass you wonder how she's able to walk straight. Bastila has mastered the art of Battle Meditation, a Force power that allows a user to strengthen the morale, stamina, and battle prowess of their allies while causing their enemies to lose the will to fight. She is also a potential love interest if you choose to make a male.

Mission Vao: A young Twi'lek you meet on Taris that travels with her Wookie friend, Zaalbar. A good-hearted individual that's developed street smarts and had to do some shady things in the past in order to survive. As you play through the game you'll find she has some unresolved feelings concerning her brother.

Zaalbar: Now meet the Wookie friend, Big Z. If you thought you were going to be freed from some Wookie yells you obviously haven't been a Star Wars fan for long. Zaalbar is Mission's friend, having met on Taris after a skirmish and has been watching out for each other ever since. I hope you like him okay because... well, I won't spoil it for you.

Canderous Ordo: A Mandalorian mercenary you also first meet on Taris, voiced by John Cygan who also did the voice for Solidus Snake in Metal Gear Solid 2. He's the first Dark Side character you meet and offers you a way off the rock that is Taris and joins your party from there.

T3-M4: The closest thing to R2-D2 you'll get in the game. An astromech droid constructed for the planet's local crime lord in the under city, which you're going to screw over by taking his droid, among other things. Such is the Circle of Life.

Juhani: Juhani is a former Jedi Padawan who turns to the Dark Side after it's believed she killed her own Master out of anger. You can find her once arriving to Dantooine as part of your own Jedi training. Whether the character lives or dies is entirely up to you. Annnd, there isn't much more to say. Her primary contribution to the story is dying. She's like Cooper from Dino Crisis, only with a lot more filler.

Jolee Bindo: Another former Jedi who is stranded on the Wookie's homeworld of Kashyyyk. Voiced by Kevin Michael Richardson. You know, that guy who was Goro in the first Mortal Kombat movie? Yeah, that's him. He left the Jedi Order and flew across the galaxy before getting stuck among Wookies and is called a Gray Jedi because of his neutrality.

HK-47: Everybody favorite assassin droid! You'll first bump into HK-47 when you go to Tatooine. He was developed by Darth Revan and that fact shows with how bloodthirsty he can be. It's easy to see why the character has won so many awards after the game was released. He has the most personality out of any of the characters in the game, and was the most original Star Wars character to come around in years, and he's hilarious! HK-47 is one purchase you won't regret making.

Not all of the characters have as much importance to the story, or even where the gameplay is concerned. Juhani is the weakest link in this area as she's a mediocre Jedi at best and you could choose to kill her early on in the game and you honestly wouldn't miss much. It would have been best to have her as a minor character you just meet during your Jedi training instead of making her a member of your party.

Probably the biggest flaw the game has is that it doesn't possess the best replayability. The second or third time you play the game you'll notice that the game doesn't really get going until you arrive on Dantooine. Taris is just one prolonged set of plot points in order for you to get off of Tari. Otherwise, some of the things you choose to do and invest time in is pointless since the planet is blown up by the end of it. You know how the original ending to Mass Effect 3 pissed people off so much because it rendered a lot of what you've gone through in the games utterly pointless? That's Taris.

And Darth Vader thought he was being so original blowing up Alderaan.

Aside from Pazaak, I don't care much for the mini games. The first time you play them they just serve to make an already long feeling part of the game that much longer and just become a nuisance after that. I think the game would have been just fine not including those two. At least the Swoop Racing after Taris is optional, so I can't complain too much, but the other mini game isn't. At least in my experience running into TiE fighters were rare.