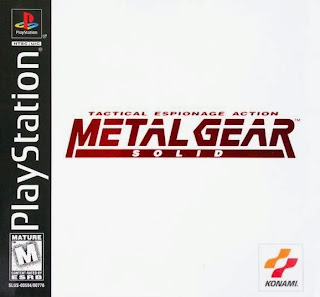 For Veteran's Day 2013 I could think of no better way to honor our troops, and celebrate Thanksgaming Month then by doing a review of Metal Gear Solid. So, without further ado let's dig right in.

Developed and published by Konami, Metal Gear Solid is an action-adventure, stealth game released for the PlayStation and Windows PC. It's the third installment to the Metal Gear franchise starring Ex-FOXHOUND member, Solid Snake, who is called back to action to stop a terrorist group from launching a nuclear missile in less than twenty-four hours.

The game opens with Snake approaching his destination in a submarine while being briefed on the mission by The Colonel, Roy Campbell. After the opening sequence plays out we're brought to the title screen showcasing a picture of Snake. Your options are as followed: New Game, Load Game, Options, Briefing, Special, and VR Training. Briefing will further explain your mission so you aren't confused during gameplay, think of it as a type of prologue to the events to come. Special contains mission logs of Snake's last missions in the first game Metal Gear and its sequel Metal Gear Solid Snake. Once you beat the game it will also contain a demo reel of all the cut-scenes you've previously seen so you can watch them any time you want.

VR Training is just that, training. You have three separate categories that unlock once you finish the stages in each one. This prepares you for the game's obstacles in order to avoid being seen at all costs, although you could make the case the training is harder than the game itself.

When you start a new game you have your choice of difficulty, something that was changed from the Japanese version. Because, us Americans are cissies, apparently. Hard and extreme make you go without a radar and change guards patrol route and strengthen their field of vision. The torture session will be extended little by little too depending on which difficulty you choose.

Once in the game you have to be able to get past the enemy without anyone seeing you. This include guards, surveillance cameras, and not tripping invisible sensors. You can accomplish this by pressing up against walls to look around corners, watch the enemies positions on your radar, memorizing patrols so you know where those weak points are, or just find a suppressor for your SOCOM and shoot them when their back is turned. Hell, you can even disguise yourself as a cardboard box. I'm not kidding. This trick even allows you to be shipped from one base to the next via truck if you're looking for a shortcut.

At any time during the game you can call your allies for information. The Colonel will usually point you towards your next objective, Naomi Hunter will pitch in on things that involve boss fights and genes, Mei Ling is assigned with saving your mission data and will assist Snakes through Chinese proverbs, Master Miller provides info in what a person needs to survive, Nastasha Romanenko will give you information about nuclear weapons and any of the weapons you find, Meryl and Otacon both are useful for finding out things about the base, and one man by the name of Deepthroat will contact you to warn you of danger, but will never respond if you call back. They're all designed to help the player in some way, and new dialog will open up after the end of a boss fight, an important event, or if you're equipped with a specific item when you call.

The overall gameplay isn't that much different from its predecessor Metal Gear Solid Snake, except that it fully embraces all that technology had to offer at the time of development. It was also one of the first PlayStation games to include the DualShock Analog Controller that included two analog sticks and a vibration when taking hits, or whenever a scene plays that would cause it to vibrate. Metal Gear Solid also had a couple of unique ways of using this, by breaking the fourth wall. Yes, if there's one thing you'd see Metal Gear do a lot of, it's breaking the fourth wall. The first instance is when Psycho Mantis, one of the members of FOXHOUND, asks you to lay the controller down on the ground so he can demonstrate his psychic abilities. Another is when Naomi Hunter asks the player to put the controller on their arm so the vibrate can help any soreness that comes after the torture scene. That's pretty considerate of them.

Other examples of them breaking the fourth wall without vibrate can range from subtle to not so subtle. One such example being as early as the briefing when the conversation is describing the enemy and the player's combat experience at the same time with Snake replying, “Video game players, huh?” Other times they'll acknowledge the background music, or the lack of background music. Before the boss fight with Mantis, he'll read your memory card and if you have any other Konami games on your file that was available at the time, like Castlevania Symphony of the Night and/or Silent Hill, he'll comment on them. He'll also comment on how you've progress through the games, how many times you've died, been caught, etc. Revolver Ocelot will mention the game over screen when explaining what would happen if the character dies in the torture room.

“When your life reaches zero the game is over, there are no continues my friend.”

If you haven't saved at all up to this point he'll add “You don't want to go down that long road again, do you?” Nothing like a villain who will taunt you for being an idiot.

One of the other things that makes Metal Gear Solid stand out amongst the rest is its story. It's well thought out and grounded in enough reality that you really can see it happening in real life. All of the characters, good or bad, have reasons for doing what they're doing, get plenty of development, and the voice acting is among the best. It knows all the right buttons to push, and when to push them. It can be serious, funny, and sad, even making you feel sorry for a couple of the bosses you face in the game, the most notable of which is Sniper Wolf, and to top it all off, it's educational. I learned more about genes, nuclear weapons, war, politics, firearms, and explosives by just playing Metal Gear Solid than I ever did in school.

The game itself isn't long at all, it's only the length of each cut-scene that takes hours to get through. Skip all of that and you could probably complete the game in a single day, but it has a lot of replay value with an alternate ending, and special items you can unlock. You can even unlock special outfits for Snake and a couple of other characters. There are also some Easter eggs you can find if you know where to look. The cut-scenes alone are at least three hours long all together, and that's excluding the twenty minutes briefing, and opening introduction before the title screen, and they only get longer as the series progresses, getting to the point where they even offer you to save in-between the scenes. When you have to give the player an option to save in-between scenes you're doing something wrong.

There are times where the game will trade self-explanatory methods for innovation, and then tell you something that you most likely already know. For example, the first time you approach a ladder the Colonel will call you (you can ignore it, however) and tell you exactly how to climb up or down a ladder. Chances are by that point you already know how to climb a ladder to begin with, but later on in the game you're told to contact somebody by finding their frequency on the back of the CD case. This is another fourth wall joke as they literally mean the back of the CD case that the game came in. Now by this point in the game the fourth wall jokes has been subtle so at first you're thinking they're talking about the disc that President Baker gave you, or something else you need to find. Nope.

The most annoying example is during the Psycho Mantis boss fight. Now the main reason this was hard is because a lot of people going in at the time wouldn't know that you needed to change the controller port into controller port 2, and how would you be able to figure that out? I only knew it because I watched my brother, and I don't even know how he figured it out. If you didn't have a guidebook, or the internet (which wasn't very big at the time) you wouldn't know what to do, and it's only by the fifth time you call the Colonel that he tells you. So, let me get this straight, telling us how to climb up and down a ladder, only takes one Codec call, but telling us how to beat someone you can't by the usual means? Five calls. That's nice.

There actually is a way you can beat Psycho Mantis without having to do that trick, but it only works after calling the Colonel five times and then dying without changing the controller port, so what's even the point of that?

Metal Gear Solid was once described as a movie with gameplay rather than a game with cut-scenes, and I'd say that is true for the most part. It is very much like a film you can play with how the story and characters are presented, with a soundtrack that sets each mood perfectly, and it shows that a video game can be more than what was the norm back then, and challenged what they could be. It is a game that teaches peace through the ugliness of war.