The Legend of Zelda: Ocarina of Time

It's November here in our crazy, screwed up little world, and while advertisers and stores are already gearing up for Christmas, the rest of us are getting ready to celebrate the day we fatten up a bunch of Native Americans before brutally slaughtering and raping their land. In honor of that glorious day I bring to you, Thanksgaming, a time where we can take a look back fondly on the video games of our childhood, whether you grew up in the 70's, 80's, 90's, or the 00's. If it was a part of your childhood then it deserves recognition. Now, while it's not possible for me to properly represent every gaming generation that has come and gone, I will be doing my best to look at various titles that came out during the 90's, 80's, and even the late 70's, from Nintendo, PlayStation, Sega, and Atari. To kick things off, a franchise that I'm sure many who are reading this right now are all too familiar with. I am of course talking about, THE LEGEND OF ZELDA!

Co-created by Japanese game designers, Shigeru Miyamoto and Takashi Tezuka, The Legend of Zelda made its debut in Japan in 1986 and came out to North America one year later becoming an instant classic that spanned sequels, prequels, spin-offs, and countless stand-alone titles going on three decades. It is revered as one of the best video game franchises of all time, even having its own cartoon show in the 80's, but we don't talk about that. In 1998, the fifth installment of the franchise and the first game for the Nintendo 64 and fifth generation of gaming history was released, this very same month. So take out your ocarina and get ready as we dive into The Legend of Zelda: Ocarina of Time. 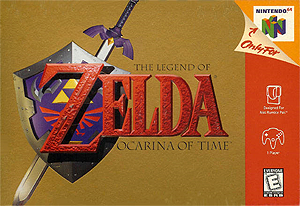 Ocarina of Time was the first Zelda game I had the pleasure of playing, as well as the first N64 title I owned after purchasing the console. My first game would have been the original Legend of Zelda for NES if someone, I won't name who, had let me played his copy, but noooo! It was gold and I would have ruined it. You don't just game block a kid like that, people have killed for less!

As is the norm with Zelda games, you play as Link, who can be named anything the player can think of, this time around he's a young boy living in Kokiri Forest. He's also the only boy in the forest not to have his own fairy, but that all changes when the Great Deku Tree (fatherly guardian of the forest) assigns Navi to the young boy, and then summons him to lift a curse that was put on him by an evil sorcerer by the name of Ganondork – I mean, Ganondorf. After being awarded with the green Spiritual Stone, Link is sent to Hyrule Castle to meet the Princess of Destiny, and begins his adventure to save Hyrule from the sorcerer that would see it all go kaput.

Even by today's standards the game still looks and sound great, maybe not as polished as today's generation of games are, but it certainly doesn't feel dated. Everything from the visuals, to the character design, and straight down to the soundtrack does an excellent job of pulling you into this fantasy world you would expect from a fairytale book. If Zelda was a movie, it would have been made by Walt Disney, it really does feel that magical, and I be the long lost brother of Princess Zelda if Kokiri Forest isn't based off Peter Pan and Neverland. They live in a forest, everyone wears green and is accompanied by a fairy, no one ages, and adults are treated as hostile, but I digress. You can probably find references to several fairytales in Zelda, some more obvious than others, if you simply know where to look.

At the beginning of the game you're limited to the Kokiri Forest until you finish the first dungeon, then you're able to go to Hyrule Field which acts as a hub to all the main areas in the game including. Since it's an action-adventure game, there is plenty of exploring and discovery to be had, so I'd advise not to rush through your main objective and take the time to look around each area. On top of the main objective, there are several side-quests and other fun stuff you can do to pass the time.

All right, the real unique factor when it comes to the game is after you get to a certain point, you can switch between the future and the past. You can run around as Young Link, which is what you start out as, and then Adult Link, who is required in order to face Ganondork and save Hyrule. Some times you'll be required to switch between the two timelines in order to bypass an obstacle in your way, and there are things you can do that will pay off when you get to the future. There are also certain items you won't be able to use depending on which timeline you're in. Obviously, Adult Link isn't going to use a slingshot. The other adults would make fun of him, and Young Link isn't going to be able to carry the Master Sword, or the Great Sword, he can barely fit the Hyrule Shield on his back.

The ocarina is an object you receive early on in the game, hence the name Ocarina of Time. There are a bunch of songs that you can learn on it that has different functions. The game also offers us a day and night cycle where time passes by normally when you're in a place like Hyrule Field, or Lake Hyrule, but stands still when you're in a town. Thanks to the day/night cycle, you can visit each individual town during the day or night, and some places and people will only be available depending on the time of day you select to visit that town. Others will be relocated accordingly.

There are a wide range of enemies in the game and there's no way I'm going to be able to go through all of them like in Devil May Cry and F.E.A.R. 2, so I'll try to mention as many as I can. We have Deku Baba, man-eating plants that are a lot like the ones we see in Mario, these skull spiders named Skullwalltula, not to be confused with the Gold Skulltulas, small, plant things with feet that pop up out of the ground and shoot Deku Nuts at you. Naturally called Deku Scrubs. A tag team of lizards called Lizalfos, who jumps platforms between lava and attack you with daggers, which I hate with a fiery passion that burns in every fiber of my being, and bubbles called Shabom. I'm not kidding, bubbles attack you and they hurt like hell. Since I know I'd probably get some “Aww” if I don't mention them, in the future you'll meet these zombie-like creatures called ReDeads that look like skeletons with wooden heads, and you hear them scream when you're in their presence. For them I have one advice, don't get too close.

Each dungeon will have a map and a compass that you find in a large treasure chest, as most important items you find in dungeons like a new weapon to help you on your quest. You don't have to get either the map or the compass, but they sure do help! Near the end of each individual dungeon you have a boss, and some dungeons possess a miniboss leading up to the main boss. After the boss fight you get a heart container which add a new heart extending your health, and the object you went in there to find in the first place.

Some times when you're talking to people the cameras will go all wompy on you. One time I approached a Goron to talk to him, and the camera spun around to his rear and I was looking at a Goron's ass. A little distracting.

Another thing is when you're set to memorize the ocarina songs. They'll show you the song twice to memorize and then when it's your turn to do it they have each command to put in still on the screen, only faded. I get that they want you to learn the mandatory songs in order to advance the game, but did they really think we would forget what we just saw twice? Apart from that, there isn't a lot about the game I would really see as flaws.

There's a reason why it's considered one of the best Zelda and video games of all time, and if you like anything to do with fantasy, fairytales, medieval, and adventure, then grab your ocarinas and let's play some songs!

Or a violin. That works too.