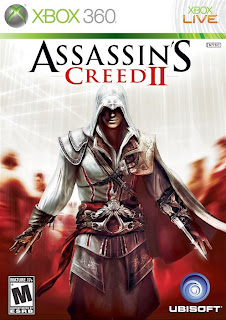 Assassin's Creed II is an action-adventure, stealth game developed and published by Ubisoft for the Xbox 360, PlayStation 3, and Windows PC, and is the sequel to Assassin's Creed which came out two years previously. Desmond Miles returns to once again plunge into the memories of his ancestors, only instead of Altaïr Ibn-La'Ahad, it's Ezio Auditore da Firenze of the renaissance!

The game begins with a recap of what you learned in the first game, in case you either didn't play the first game or to refresh your memory. You're still being held captive by Abstergo Industries, a multinational corporate conglomerate that acts as the modern day face of the Templar Order, whose main goals are to eliminate the assassins and create a New World Order.

But never fear, Veronica Mars is here! *cough* Lucy Stillman, to be more exact. She's a mole working for the Assassin Order that assists in your escape and to recruit you to the Order to help the fight against Abstergo. Right away I love the banter going on between Desmond and Lucy and how when you walk next to a person your character moves slightly to the side to look at them as they walk like you would in real life.

You can also punch people in the face, grab them to throw them across the room, or headbutt them repeatedly. When they're down? Kick them! Yeah, you can repeatedly stomp on fallen enemies once they're on the floor. That's just your basic fighting as Desmond, once you're playing as Ezio and got your weapon there's a lot more that can be done.

One of the most interesting things about the game (and the whole franchise for that matter) is it use of history in the story and being able to explore the time period in an open-world environment. Not only that, but it also provides information on historical figures and locations that the game will notify you about as you progress and can review in your database. If you're a real history buff then you may find this and the rest of the franchise very enjoyable because of the clever inclusion of real history and the liberties that are taken via the story. Or that last part may drive you mad, I don't know I'm not a history buff.

You can navigate the area by a lot of running, jumping, climbing, and balancing. You can usually climb up walls as long as you have something for your character to grab onto, like brick walls, windows, and ledges. Otherwise, he won't be doing any climbing. You can also leap from one rooftop to the next, look over ledges and then drop down carefully. Thin wires leading from one rooftop to the next? No problem, your controls still allow safe passage across. One of the things I love about running around town like a monkey is that the NPCs will actually acknowledge it. Whether it be a surprised gasp, or a throwaway line like “Why can't he just walk like everyone else?” they won't just always go about their business like nothing happened.

Cut-scenes are also interactive through the use of Quick Time Events. Some you need to press quickly to alter a scene, and others are mandatory, but those buttons won't disappear until you press them. Think of the former like bonuses.

Stealth elements introduce themselves as early as the beginning when you take advantage of hay inside wagons on the street to hide from enemies (you can even lunge off a ledge and fly right into the hay!), and later on in the game when you learn to blend in with a moving crowd of people. Because clearly a hooded figure in white wearing clothes that nobody else is isn't going to stand out like a sore thumb and arouse any suspicion whatsoever.

Some of the new things introduced to the gameplay from the first one is the ability to swim underwater, operate a carriage, boats, and ride on horse back (look at my horse, my horse is amazing – give it a lick! *shot*). Then we have Eagle Vision, the ability to identify specific people and landmarks in the game, also really good at finding hidden doors, which can now be performed through third-person and while moving. You can also make new weapons for yourself through the help of the late great Leonardo da Vinci by finding Codex pages left behind by Altair from the previous game which he can then translate for you.

There are two-hundred missions in the game overall, half of which are part of the main story and needs to be completed in order to finish the game. The other half are all side-quests. Missions can range from escorting someone, beating up a cheating husband, etc. That's right, you can beat up men who cheat on their wives. This game is the best anti-cheating propaganda I've seen. “Remember boys, if you cheat on your wives/girlfriends a mysterious man in white will come out of nowhere and knock your teeth out!” Missions can also change from their original objective like a simple escort mission turning into a chase or an assassination attempt. Investigating, which was a main part of the previous installment, is no longer as reoccurring throughout in Assassin's Creed II. Do keep in mind that during some assassinations if you're caught it will trigger a game over (unless you stab them very, very quickly.)

At certain parts in the game you can call on a group of NPCs to aid you on your mission. These NPCs range from courtesans, mercenaries, and thieves which can be used to fight off enemy guards, distract them, or lure them away so you can make it past unseen. The game also introduces a day and night cycle. Wow, this game really is the Gold/Silver of the Assassin's Creed franchise.

Keep an eye out on your health bar because if it gets too low you'll need to see a doctor. I'm not being cute, you actually will need to go to a street-side doctor for treatment, or buy medicine for use which becomes available later down the road. Also, beware of white stuff (that came out wrong) like all the white lines in the background of the cover box? These represent the simulation you're in and are meant to keep you where you're supposed to go until that area is unlocked. If you enter an area where the white lines are present, that can trigger a game over. While I'm on your ancestor's memories I should probably take this time to explain how all of this is even possible.

In the game is a device called the Animus, it's a virtual reality simulator created by Abstergo to render genetic memories into three dimensional imagery and bring a whole new meaning to “retracing your steps.” The Assassin Order get their hands on their own version of the device, an updated version called the Animus 2.0 and for spoilers sake I won't go much further than that. Think of it like The Matrix (History Edition) and if you're anything like me you're going to find following the story just as hard as The Matrix. What I get for starting with II.

Assassin's Creed II is such a step up from the original game that I would recommend playing the first one just so you can further appreciate all the second game has to offer. The gameplay is more dynamic and less repetitive and the voice acting and use of history is fantastic making everyone and thing (whether they're really part of history or not) feel very real. I'm not saying those last two things weren't in the first game since I never played it, I'm just saying. If you enjoy action, adventure, stealth, history, running around like a monkey, and an open-world environment to explore then this game is just what the street-side doctor ordered. If you're not interested in any of those things then you'd be better off just skipping it entirely.