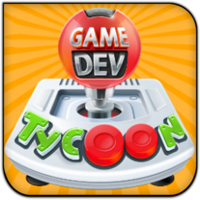 Game Dev Tycoon is a business simulation game developed and published by independent gaming company, Greenheart Games, and later published by Valve Corporation for Steam. You take control of your own video game company at the start of the computer boom and then relive video game history as you develop your own games, grow your company and aim to become the number one game developer in the industry.

You start out in your garage and as your business grows so will your room area. You'll be able to move into a bigger office, hire more people to make bigger game titles, take game cons by storm, host your own, and even develop your own video game console, but let's not get ahead of ourselves. In order to make it in the gaming industry you have to know how to develop video games. Luckily, the game offers a tutorial to help get you started.

At the start you'll only have the option to develop a game or do research. Clicking on game development takes you to a new screen where you can choose the type, genre, and platform of your game as well as naming it. You only have four types to start out with, but you'll be able to research more provided you have enough research points, we'll talk about research points in a minute. The most important thing at the start of developing a game is having a good combo of type and genre. Let's say one of the types you have at the beginning are sports. A good combination to make a sports game would be sports, simulation.

Then you choose a platform. Again, at the beginning you only have the PC and Commodore 64 to choose from. The C64 being renamed to the G64, as well as all other consoles in the game, to avoid infringing on people's copyrights. The G64 cost more to make a game on than the PC. As the game progresses and more systems are released you'll have newer options, though it costs you money to get a license to develop a video game for each new system. After that, you have your choice of graphics: Text based or 2D version 1. Make your decision and then the first stage of game development begins.

In the first development stage you have engine, gameplay, and story/quests to work with. They're depicted in bars that you can make go up and down to indicate how much focus you want to put on that particular part of the game and this affects the game's overall rating. Now, for a sports/simulation type game, story/quest is irrelevant so you can take that right down to zero and focus more on gameplay and engine.

In the third and final stage you have world design, graphics, and sound. You also have a list of special features on the side you can choose from, this comes more into play after you've made a game engine. It also reminds you of the choices you've made building up to this part and letting you pick things like sound. With a sports/simulation, world design isn't important and you'd want to put more focus on sound than graphics. After that your game is done and it's ready for development.

All throughout the stages you'll notice four color-coded bubbles called bugs, design, technology, and research. The design and technology shows how much focus has been put into those parts of the game, bugs are errors that you'll want to work out before publishing, and research points can be gained while working on the game (among other things) in order to get new types, learn how to make your own game engine, and many other things to help you grow as a developer. Once the bugs hit zero you'll want to finish as soon as possible, don't doddle or a bug might sneak in at the last minute right when you're pushing the finish button. Lord's knows that happened to me more times than I care to admit.

Whenever you finish a game you gain experience points in each of the field listed in development. When you grow a level in say, graphics, you get an option to research better graphics to make better looking games, and this theme carries on as you push through each level. Do keep in mind that most things you research will cost money. At the EXP page you also have the option to release your game or trash it, meaning you can develop things just to gain experience and never let it leave the cutting room floor. While you're developing games you can also market to build hype, this happens at the beginning through a stroke of luck with people wanting to interview you. If you're just developing to gain experience and have no plans on releasing the game then it's advised you don't do any of these things or people will be disappointed.

Once you published your game, reviewers will have their say. 10 is the best number you can get, obviously, but there's also no shame in getting a 6. 5 is average and that's typically the number you want to stay above. From there your game goes on the market and sales will go up accordingly. If the game is good you'll gain fans and could break sales records. If the game is bad you'll lose fans, assuming you have any at the moment. There are other choices later in the game you can make to help you gain fans or it can make you lose them.

As sales go up, your money go up. Money is important and something you'll want to keep an eye out for. It costs money to make successful games and you also have a rent to pay at the end of the month (hello, life, you suck!). If you reach zero the bank will only allow you to withdraw so much in the negatives before you go bankrupt. If you're in the middle of making a game as this happens someone will come in and loan you money that you'll have to pay back later. You can do that or just go bankrupt. When you go bankrupt you'll be bought out by another company, rights to the games will go to them, and the game will be over. Remember to save a lot just in case.

When a game is complete and on the market you can generate a game report. This tells you what's important about the game, what's not important, if the combination work, and how well it works on the chosen platform. It also earns you research points. These will be saved and stay as reminders when developing future games. A + indicating how well it works in that category and a - indicating how much it doesn't.

Usually around your third game you'll get a message from a man who is impressed by your work, or think you have potential depending on how well you've been doing. This will unlock contracts that you can take on during any point of the game to earn some extra money. They usually come with a specific task, require a set number of design and technology points, and has the money you can earn listed. Be careful though, if you take on a job your character isn't up to the task for you'll miss deadlines and be penalized losing money as a result.

When you make it to your first office and have employees, training is introduced and become necessary to proceed. Each employee will also need time to be broken in to be more efficient. Characters stats are separated by development, technology, speed, and research. The higher up these stats go the better and faster they'll be at their jobs, but you don't want to over-task them. There are times they'll get so tired you'll want to send them on vacation so they can get back their strength and be able to give you 110% even though mathematically that makes absolutely no sense.

At a certain point you'll be able to make larger games for other publishers. You need a certain number of fans however before you start publishing games yourself. The games you make under this option have a pre-set type, genre, and platform, some times they'll let you pick and some times they won't. This time around you task each individual developer on your team with a specific part of development and try not to exhaust your workforce. To do well with medium games you need at least four developers under you, and for large games you need six.

It really is neat reliving video game history. All the big companies are there, Ninvendo, Vena (Sega), Vonny, Micronoft, and of course the PC updates as years go by. The NES is the TES, Sega Master Systems is V, PlayStation is the Playsystem, and the X in Xbox is M. Mbox! When you get into the current modernized era you can create multi-platform games (up to three) or just go with exclusives. What better ways to honor your favorite game companies and systems than to make the best games you can on them? It even notes major events in history and people's reactions to them like the short lived partnership between Sony and Nintendo, and when the C64 and Sega bowed out.

Even unlocking the achievements can be very fun. You get one just for starting the game because you gave money to a company that really needs it, that made me feel real good. If you take too long coming up with a name you get one for writer's block and get this, if you make a sports game while you're still in the garage and call it Pong? The Pong board on the wall will begin to move. Those are just a few of the achievements, for obvious reasons I'm not gonna go naming them all.

The development process of the games are basically a bunch of bubbles flying across the screen to the top. If you were looking for a more detailed development process then sorry bud, gonna have to find another game. Or make your own, that's what Greenheart did. That's the only setback I can see in what is otherwise a perfect business simulator.

Game Dev Tycoon had a lot of time and effort put into it and you can tell just by playing it. Like Spelunky, it possesses that old school retro style mixed in with today's current technological advancements bringing you the best the developers could while lacking the money and resources of bigger gaming developers. If you love business simulation games, or any simulation game, and/or tired of the big AAA games and looking for something new, or just want to rock the retro look, then I recommend Game Dev Tycoon! The game offers just as much chance for creativity as it dishes out.