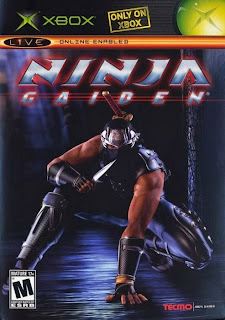 Ninja Gaiden is an action-adventure, hack and slash game for the Xbox that was released in March 2004, and is the first game to kick off the modern series of Ninja Gaiden thirteen years after Ninja Gaiden III came out for the Nintendo Entertainment System, so we're looking at a complete decade, here. Once again, the game stars Ryu Hayabusa, a master ninja who sets off on a quest to retrieve a powerful and dangerous sword and to avenge the death of his fallen brethren.

The game proves just how deadly it can be straight from the start by having a warning message scroll over the screen. Okay, okay, so it's just a bunch of technical stuff, but you still gotta love a game that takes that much time just to hammer in a warning. After that, we are told about the evil and dark Dragon Blade, because a blade can't just be evil or dark, no, no, it has to be BOTH! It was so powerful and dangerous that it was sealed away and if anyone was to ever break the seal on it it would gather the evil and hatred of the world transforming the one who wields it into the devil incarnate. There is also another blade, passed down by those of the Dragon Lineage, the same of which who sealed away the former sword, simply called the Dragon Sword.

From there we go to our title screen where we can select a new game, load game, go online (I don't have Xbox Live so no I won't be talking about that) or play around in options. Upon selecting a new game we get... the same exact cut-scene we just saw a few seconds ago! Did they think we'd forget? Hell, you can also read the prologue in the first page of the instruction manual, that's THREE times you get it!

When you start the game you have your choice of normal or hard difficulty. What, did you think you were going to be able to play easy on a Ninja Gaiden game? I don't think so! This is a franchise that gets its rocks off by being as hard as can be and now with new technology (at least new at the time) they have even more ways to cause you to spew profanity at the television screen.

Each level is separated by chapters and each chapter starts off with a screen that highlights your mission objective, kinda like how Devil May Cry does. The game took a lot of inspiration from the Devil May Cry game when being developed. At the end of each chapter is a boss fight, each one tougher and more infuriating than the last.

The first stage is basically a training level where you learn about all the basic maneuvers you can use as a ninja, some of these helpful hints will be told to you via a message thrown into the wall nearby with a knife. Nothing like a message that can kill the receiver before they can read it. This is something that will repeat whenever there's a helpful hint for you. You can speed walk on walls to get over ledges, bounce off a wall to reach a higher up platform, bounce between two walls close to one another to get up an even higher ledge, and walk straight up a wall to the ledge above.

COMBOS! You can't have a hack and slash game without combos! The weapons has levels that when they go up give you access to more of Ryu's deadly techniques. It's basically a lot of pressing X, Y, and A. Some, like in Devil May Cry, requires you to slightly pause in-between, and some moves can only be performed by running, jumping, or holding down a button to charge power before release.

You can have secondary weapons like Shurikens. It's start with throwing just one Shuriken at a time and then finishes off with throwing three in a row. With the bow and arrow you can go into first-person view mode to help improve your shot

Then from there we have Ninpo, secret ninja techniques passed on in scrolls which you can find, or buy, then equip to Ryu to use in battle. Their power is represented in a form of a little fireball underneath your health bar. Some techniques include, but are not limited to, the Art of the Inferno (FIRE! Back to the family, a guaranteed emergency, the radical MC H.P's got the melody. ONE – TWO – THREE – FIRE!). The Art of the Ice Storm, which I think has been happening lately with how cold everything's been, and the Art of the Inazuma, which is internal bioelectric currents coming from Ryu. Jeez, he's come a long way from just being a little purple ninja in an eight bit side-scroller.

While you're going off on your merry way you can find several items as you go. One item you'll always want to have at least one of is the Elixir of Spiritual Life, which can also be used to replenish Ryu's health. There's also a stronger version of this item which replenishes even more. Life of the Gods increases Ryu's health bar and some times have to be put together piece by piece like Zelda's heart container. The Spirit of the Devils increasing Ryu's Ki, and Jewel of the Demon Seal increases the level of one Ninpo attack of your choice.

We also have armlets which changes Ryu's attributes. For example the Armlet of the Sun increases attack power and the Armlet of the Moon increases defensive power, but you can only equip one at a time so it's your choice of offense or defense there. There is a rare item called the Golden Scarabs, a legendary treasure that can be found scattered about, but are extremely rare, so rare that the shop keeper Muramasa wants to get his hands on them. Speaking of the shop, in addition to buying items with Yellow Essence you can also get some blacksmithing done. This will increase the level of your weapons so you'll be able to perform more combos, but do keep in mind that you won't be able to upgrade every weapon this way. You can also talk to the man himself while visiting the shop, if you wish (psst! I would advise talking to him)

As the game goes on you'll find more primary weapons. In addition to the Dragon Sword we have Nunchaku and a War Hammer. Each weapon has a level, can be upgraded accordingly, and a list of combos to choose from.

In order to save you need to keep a look out for the statue of a dragon that has a stone hanging out of its mouth. You can usually find it right before a boss fight or at the beginning of a new stage further down the road. Don't pay attention you'll miss it entirely. Not that I would have any experience with missing the save point and dying and then having to start the level all over again.

The story is your pretty straightforward avenge the clan and stop the villain from destroying the world trope, and let's tack the word dragon onto things to make them sound more important than they'd be otherwise. Not to mention a predictable plot twist at the end. So, I wouldn't go into it expecting an overly amazing story or anything.

The camera sucks, I'm sorry, it does. It's not a fixed camera like Devil May Cry, but you don't get much control of it, either. Something that could have been done easily I would think if you let us control the camera with the right control stick and click on it if you want to go into first-person view mode. Instead, the most we can do is bring the camera behind Ryu, but it will still, on occasion, move to the scenery at the worse possible times.

In conclusion, it's Ninja Gaiden! It proves to be just as difficult as the first three games on Nintendo and therefore just as rewarding as you get progressively better and better at the game. If you're a hardcore gamer or whatever then it should be right up your alley, if you're a casual on the other hand, the game may not be your cup of tea as it has one heck of a learning curve that could put you off it entirely.