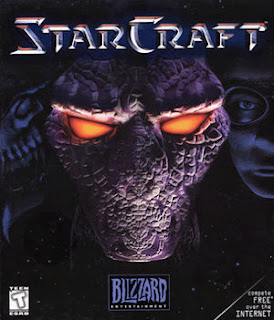 StarCraft is a Sci-Fi, real-time strategy game developed and published by Blizzard for Windows PC in 1998. It stars three different sets of species and puts you into the commander seat much like in Command and Conquer. The game opens with a human male in armor battling against an alien species later identified as the Zerg until help comes in the form of one extra man. Meanwhile, up above in a ship looking down at the chaos are two men discussing the ramifications of releasing such an infestation like the one happening below. The obvious leader of the two asks the other if he's willing to go all the way with it, in which he responds with a yes and the ship takes off leaving those down below to their most unwelcome fate.

After our opening we're taken to the title screen which has your single-player campaign, a campaign editor mode which I'm not going to touch with a twenty foot pole because I know I'll break something, and then finally multiplayer. The single-player campaign is separated by three episodes, one for each major species in the game. Going from the Terran (humans of the future), Zerg (aliens), and the Protoss, a humanoid species with access to psionics abilities. You're unable to play the Zerg and Protoss campaign until after you finish the Terran's.

The story is told through the used of mission briefings and cinema cut-scenes at key points throughout the campaign. Instead of the mission briefings being full motion video and performed by actors, it's in a screen with words going by like a teleprompter and circles around the message where the faces of the character talking at that time appears in CGI animation.

The game is nice enough to start you off with a tutorial mission to show you the basic of gameplay. We have our main base called a Command Center, which you don't even have to build, where you can create units known as SCV (Space Construction Vehicle) which are required to gather minerals, gas, build other structures, and repair damaged buildings and vehicles. The more minerals and gas you collect, the more structures and units you'll be able to supply yourself with (this goes for each species) as you need a certain number of both resources in other to keep building your forces. From there you can build other such structures like Barracks, Refineries, places to put together ground and air vehicles, but you also require Supply deports to provide the supplies necessary to continue building these structures.

Each unit has more specific commands you can give them over in a list on the bottom right corner of the screen. As I mentioned with the SCV, he can gather and repair as well as construct structures, move and attack. Many of your soldiers can patrol any area you select on the map or hold their ground. Other things, like a drop ship for example, can store up to several units (even ground vehicles) and fly them over areas they wouldn't be able to get to otherwise and at first are critical in completing a mission.

Visually, everything looks great. It doesn't feel like I'm playing an old game at all and the characters on the screen feel so alive in colorful environments. From simple lines such as “You want a piece of me?” to a sarcastic “Yeah, I hear ya, sir!” every unit has their own personality that registers to the player and makes the game all the more fun and easy to get into.

The Terran faction is accompanied by a sort of A.I. called the Adjutant, but some times is just referred to as computer although it's more humanoid hardware and looks like a cyborg than a standard computer. She appears in all the briefings for the Terran explaining the mission, patching through other communications, and informing you of important updates during the mission. With the Zerg faction the Adjutant is replaced with an eye ball. An eye that gives you orders. Don't question it! On the Protoss side of things we have Roy Campbell – I mean, Gally “Vanish” Gregman – I mean... Aldaris. A Khalai Protoss of the Judicator Castle sent to instruct you. Who also just so happen to share a voice with the eye ball. I wonder if the Zerg and Protoss have some kind of arrangement with Paul.

Being ever as diverse as humans are, there are a couple of organizations among the Terran that separates them. For example we have the Confederacy which is a government organization you take orders from at the start of the Terran campaign. Confederacy, Confederate, I bet I know what their banner looks like. 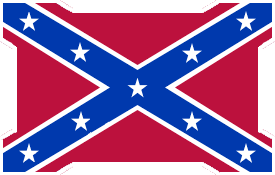 Dude, I was kidding.

The Confederacy are pretty much what you'd expect a government body to be in a game like this. Unlikeable from the get-go, shady, up to no good, and an extreme pain in the ass who only cares about their own interests.

Back over on the Zerg side of things (Zerg Rush!), their main base of operation is the Hatchery which is constructed by a Zerg drone that mutates into the structure being built. It can also mutate into a lair and later a hive granting you a tougher foundation and more knowledge of the Overmind, will of the swarm. From the Hatchery you have the creep, a living organism required to nourish Zerg structures and larvae (base unit in which all other units ultimately come from) and are required to take up vacant space for structures to be built. Both the Terran and Protoss are unable to build their own structures on the creep or land on them, but they can lift off from them.

The larvae come from the Hatchery and can morph into other units needed to build your Zerg forces. There's basically a lot of mutating and evolving going around with the Zerg which is really quite fascinating and makes me want to put them underneath a magnifying glass for further study, but they'd probably kill me for that. The larvae has high armor and resiliency, but few hit points to speak of and they'll die automatically if something happens to the creep underneath them. Left to their own devices the larvae will just wander around the building that spawned them. Even if all of your units and structures are destroyed a larvae can still evolve into a drone and rebuild your forces from the ground up given time.

Next up we have the spawning pool, a pit of green ooze which holds the genetic makeup of the Zerg and is required in order evolve the larvae and the Hatchery. It also gives them a power boost of sorts that can be utilize like faster movement and attacks. There's one structure among the Zerg that you can't build and that comes by having the queen enter a badly damaged Command Center that belongs to the Terran and infesting it. It retains its lift-off ability allowing you to move it to a safer location and then make units the way Terrans would to create the Infested Terran unit. I think I talked a good deal about the Zergs for this review, so let's move on to the third and final species you play in the game, the Protoss.

The Protoss foundation building is called the Nexus, a mammoth pyramid shaped structure that towers over the rest of a Protoss settlement and paves the way for the probe, basic construction unit for the Protoss. From there you can build other such structures like the anti-air and ground Photon Cannon, the Pylon which is needed to tap into the psionic matrix where your buildings and soldiers draw their power from, the Stargate (not to be confused with SG1) allowing you to warp in aircrafts, the Templar archives that leads into the high templar to allow for research of their more advanced psychic abilities, and a Shield Battery for support and then finally the Robotics facility that allows for automated war machines to support your troops. There are more, but I think I covered the main ones.

Units wise, after the probe we have the Dragoon, the assault walker which is more for shooting down aircrafts. The Zealot are the ideal choice to take the blunt end of all the ground attacks by enemy forces given how strong they are. The Carrier is a heavy command ship that can be used in battle. The Observers are mobile detector units and are usually cloaked, however due to low health on their part you need to be careful of anti-cloak units (yeah, those exist) as they'll be little time to escape if caught. On the plus side, they're cheap to make. There's also the Scout, a space fighter with strong anti-air attacks to challenge heavily armored enemy air units.

For one reason or another, I can't access multiplayer. To my knowledge the servers on this game are still open, but I still can't get hook up to it so I won't be talking about multiplayer in this review. Sorry.

There's a limit to how many units you can take control of at a time when selecting multiple units. This wouldn't even be a flaw if it wasn't for the fact these units could still fit on the screen and you still won't be able to take control of all of them. You'll get most, and then a couple of others will just stay behind unless you manage them directly. If they all fit on the screen and I can drag my mouse over them, then I should be able to highlight them all. If you have too many units moving at one time the ones in the back will stop, turn around, and start walking the other way. Wait, come back, it's this way, you morons! Would it have been so hard just to have them stay in wait until the ones in front get out of their way? Why do they have to be moving about like that?

During one mission against the Zerg I had all of my units and structures destroyed. Did that trigger a game over? Amazingly, no. The game just kept going, the clock kept ticking down and then the rescue team arrived to have no one to rescue and I completed the mission anyway, and people say games today are too easy? I have no idea what happened there. Did I have a guy off to the side somewhere that the Zerg didn't get to yet? Who knows.

It's not hard to see how this game managed to get Game of the Year when it came out and was the #1 Best Selling PC Game of 1998. The gameplay is heavily addicting and all the species you can play as are fun. The characters down to the smallest of units just feel so alive and the story is great to watch unfold. If you're a fan of Blizzard, Sci-Fi, or real-time strategy games, then I absolutely positivity recommend this game for you.