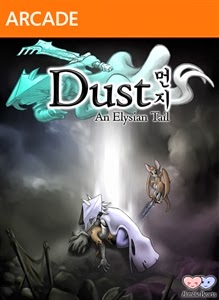 Dust: An Elysian Tail is an action role-playing game available for download on Xbox Live Arcade, and Steam. It stars Dust, a young adventurer who has loss his memories and is greeted by a talking sword named the Blade of Ahrah, and his guardian, Fidget, whom travels alongside you while you try to battle your amnesia, possessing the ability to tear down the fourth wall. I'll be looking at the PC version today.

First off, this game looks fantastic. It pulls you into a fantasy world where everyone is based off of animals, and the animation looks amazing. It's your classic 2D side-scrolling with your health bar on the top left corner of the screen, with a number indicating your character's level, an energy meter above your health, and a mini-map on the top right corner which also highlights a combo number while attacking enemies. Fight, speak to NPCs, follow the main quest, and pick up plenty of side-quests along the way. Enemies range from ground creatures, with or without weapons, aerial monsters that will swoop down, bombs you need to take out from a distance, and creatures that flow through the air like they're underwater spitting projectiles and looking like a jellyfish just as a couple of examples. After killing them they'll disappear and leave behind gold, and various items you can collect and check out in your inventory.

When you talk to a person the screen fades and then you get a close-up of the character that's speaking at the time, and the voice acting in the game is perfect. In the close-ups you can see Dust is a, uh, a fox? I'm going to say fox. Fidget looks like a furry yellow bat flapping about, and the rest are based off various animals I'm sure you could find in a forest somewhere. Same goes for bosses like the lizard called Fuse. While talking, you'll some times have dialog options to select to change the course of the conversation as is the case for pretty much every single RPG in existence, well every RPG that I've played, anyway. Your environments can change at any time as you travel, I'm talking about changes in the weather. It can be sunny one moment, windy the next, and then stormy. I'd say they could benefit from a weather forecast, but considering they seldom get it right anyway they're probably better off as they are now.

You have your standard attack that you can spam to take out enemies and as you progress through the game you'll find new upgrades to add to your arsenal of super special awesome fighting moves! Like a spin sword attack named Dust Storm that threatens to give you an arm cramp! You can also jump and perform that spin-attack in mid-air after you get the upgrade. You can even combine attacks like using the spin-attack to strengthen Fidget projectiles. Fidget can also get more projectiles later in the game.

Hanging in a certain spot is a purple exploding fruit which you can blow through the air via a Dust Storm, and then use against enemies, or obstacles that stand in your way. You have to be quick while doing it, or otherwise the fruit will explode before you get to said obstacle. Fortunately, the fruit also grows back in the spot you find it in so you can always try again. Some times you'll have to do this in order to progress.

Scattered throughout Elysian are shops where the shopkeeper is a hooded figure who calls you stranger. Jeez, I wonder where they could have gotten that from? In addition to buying and selling items, the shopkeeper tells you if you brought him materials (which can be brought to any shop) he'll stock a certain quantity of those fresh materials which can come in handy later.

Once you leave an area you're taken to the screen of a map which show each area you have available and the word new will flash next to an area when you unlocked a new location to explore.

The story is engaging and the characters are all quite lively. I also really like how one of the villains flip the tables on you and paints you to be the monster killing his children, leading to a brief moment of doubt where you wonder if you're really doing the right thing, and that's something I always appreciated in stories.

The game can lean a little on the repetitive side when it comes to running around, being dog piled on by a bunch of monsters and then smashing the buttons to power through them.

The actual boss battles in the game feel a little underwhelming. They don't come across as boss battles, they feel like a more drawn out regular enemy if that makes any sense, and after the first boss fight with the giants they DO become regular enemies and they aren't that much harder than your standard monster you fight.

I found a couple of glitches in the game. The first one got me stuck in a wall, though I'm not too certain if that was a glitch or on purpose. I got a key out of it! So, there's your silver lining. Another time while playing the game and holding down the right walk button I let go of it to find the character was still moving in that direction, and when I tried to get him to stop he wouldn't. I kept having to push random buttons to finally get the character to stop.

All in all, Dust is another fine example of just how far indie developers has come over the years. The gameplay is fun if the repetitiveness doesn't bother you, the animation and voice acting is among the best I've seen, and the characters are all likeable. If you enjoy action role-playing games, fantasy, and animation, then this is a good game to try.