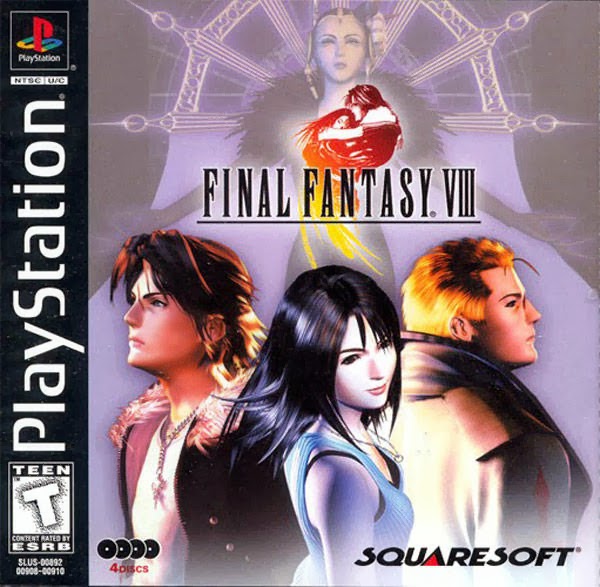 Final Fantasy VIII is a role-playing game developed and published by Square, better known back in those days as Square Soft, in 1999. It is the eighth installment in the Final Fantasy franchise back when it was a brand name and didn't have all the worlds connected to each other, available on the Sony PlayStation and Windows PC, and is now available for purchase on Steam. Starring gunblade specialist, Squall Leonhart, a student at Balamb Garden Military Academy who is just about to take his SeeD (special forces that work for Garden) exam to become an honorably member of SeeD.

The game starts off with some opening credits highlighting some art design leading up to the main logo and then the title screen. The title screen only has two options, new game and continue. After starting a new game we get a cinema intro highlighting a beach, a field, Rinoa, Squall, and lifelong rival, Seifer, battling and a bunch of other cut-scenes that would be shown later in the game alongside an epic theme song. Squall and Seifer exchange slashes to the face giving each other a scar and then the scene ends, once again with the FFVIII logo, and then you wake up in an infirmary. Couldn't even get past the intro before getting injured. I like how it's one of those light wounds as to not take away the attractiveness of either character.

Well, to make sure you don't go getting yourself injured some more let's take a look at the controls.

The game has four discs, and four continents overall with a few areas in each continent. You're limited to Balamb, the smallest of the four continents until you complete your SeeD training. One of the big changes going into the game is the new Junction system, which can be both a pain and a game-breaking tool alongside the card game, Triple Triad when done properly. No, I'm not going to tell you how to break the game with them.

First things first, you have to equip your girlfriend – I mean, Guardian Forces, GF for short. Unless you do that you won't be able to do anything except attack and run from battle. What's a GF? A summon, basically. You start out with two at the beginning of the game, Quetzalcoatl and Shiva. Lightning and ice.

The visuals of the game are kinda dated, mainly when it comes to the actual gameplay visuals. If you're used to a lot of games from today it may take your eyes a bit to adjust to the downgraded graphics, but once you get past that it's barely noticeable. VIII also does something that was (to my knowledge) never attempted again. It actually shows your comrades trail behind you as you travel (with the obvious exception being done on the world map). Once you have two allies alongside your character, they'll follow closely behind wherever he goes and spread out depending on who you're talking to. This may not seem like much, but I always liked how this was handled and it was less awkward than having people literally come out and going inside your character like how it was done in VII.

The music is great, each area having its own theme that help brings the area to life, unless it's just rehashing a song you've heard already, then it kind of loses its charm. But for the most part you can count on the soundtrack to be lovely whether you're exploring a city, in the middle of a battle, or playing Triple Triad.

While you're out in an area that has enemies the screen will have a seizure and you'll be taken to a new screen for a fight, this is what us oldies call random battles, you young whipper snappers! The battle starts, some times you get to strike first, some times they strike first and most of the time neither attack straight away. You'll have to wait for the meter to fill up before you can attack, and from there you have the command choices you selected from before and the option to flee.

Attacking is just attacking, unless you're Squall. If you're Squall you need to press the trigger button at just the right time to deal extra damage to your enemies. It because it's a gunblade, the gun part helps deal extra damage. I used to think that extended to all of them for the longest time. What you can draw from an enemy is hidden until you stock it, and the amount you get is completely random. Think of it as a lottery for magic. Come on, baby! “You stocked one fire” Just one!? Lousy no good son of a–!

From there you can only cast the spells that you could draw from said enemy you're facing. Magic is the option you want if you want more variety in your spells. Also, summons don't happen instantly like in previous Final Fantasy games. Instead you get another meter that goes backwards and when the meter is empty the summon animation begins. While the meter is decreasing the GF HP is shown in place of your own, meaning when you're being attacked by an enemy the GF takes the damage for you. Cool, right? GF has their own separate potions and phoenix downs to use to revive them, but they can't be used in battle at all.

After taking heavy amount of damage bringing your health down you'll be able to use your character limit break. Each character has their own limit break and some of them require the use of combos or pressing the trigger button to get the best damage you can, unless you put it on auto then the computer will just do them, though you may not get the best possible amount of damage delivered that way. Although, are you really going to take the chance to use it when their HP is in the yellow or even the red? That's usually when you use a healing item/spell to keep them from dying, but if you do that the limit break is gone.

The main narrative follows Squall, the only character you'll actually be able to name besides Rinoa. To say he is anti-social is putting it mildly. He doesn't like to talk about his feelings, doesn't believe in relying on others, and keeps himself at a distance. His character development in the game is actually not that bad. There's a reason he is the way he is, and in time he warms up to the people in his life, largely due to Rinoa, and the two possesses great chemistry together.

Some characters sadly lack development. Zell, Selphie, and Quistis, don't see a lot of growth in the game. Most of that is reserved for Squall, Rinoa, Seifer, Laguna, and to a lesser extent, Irvine, but that's to be expected when you have so many characters running around. Another thing to remember is that most of the characters from the main cast are teenagers. They're inexperienced, have a lot of growth left in them, a little angst here and there and... they can be annoying. “OMG teenagers are annoying? No wai!” And it's done very, very well. I don't know about you guys, but I DO know people who act like Zell, Selphie, and Irvine, and a few people who are kind of like Squall in the anti-social department.

Another thing done well in this game is that, with the exception of the sorceress, there is no clear-cut good and evil between the two sides. Both sides are just people with different views and motivations that collide with one another, something that is pointed out by Squall later in the game. The Galbadia soldiers for example, while being your enemy, aren't straight up evil. They're actually more depicted as your average grunts just doing the best job they can and having to deal with unfair bosses. While you have your noble and douchebag characters, things aren't so black.

During the course of the game your characters will fall into a deep sleep and enter a dreamlike state where you then take control of Laguna, an ex-Galbadia soldier who later becomes a journalist and who is passionate about the less fortunate. These moments in the game provides a mystery as the characters try to figure out who Laguna is and what are causing these moments to happen in the first place. Don't look at me, I'll never tell. *sings* Cause there's nothing to tell...

There isn't as much exploration as there could be. As I already noted the continents only have a few areas to explore, and towns can be rather small. Some towns you'll have a bunch of buildings to go into, but nobody to talk to and nothing to get or see, so what was the point of them even being there?

Why can I only name Squall, Rinoa, Rinoa's dog, and the summons? I could name all the main characters in the previous installments, and again with IX. The only reason you can't do that anymore now is because of voice acting, but Final Fantasy VIII doesn't have voice acting, so there's no reason why the naming should be limited. Think of all the funny names you could have given Zell.

At the end of the day, Final Fantasy VIII is a fun game with an interesting story that takes plenty of unexpected turns, fun side-quests, even funner mini-games, and an innovative, yet confusing battle system that makes the game stand out (for good or for bad), and a lot of interesting concepts when it comes to the Gardens and the overall world. It also offers good character development with the people who take most of the spotlight, and some fun banter. So, if you like ANY of the things I just mentioned, then I'd recommend you check the game out if you haven't already. If not then give it a pass.