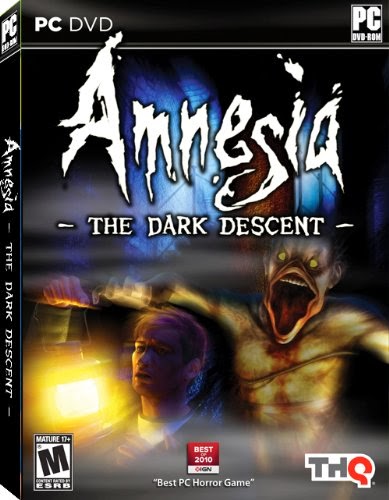 Amnesia: The Dark Descent is a survivor horror game developed by Frictional Games and published by THQ in North America through retail for Windows PC. It was released on September 2010 and came out to North America February the following year to critical acclaim success, and is considered one of, if not the greatest horror game ever made. So, allow me to curl up into a ball and cry as we dive into Amnesia.

The game opens up with a message advising the player to focus less on winning and more on immersing yourself into the game's atmosphere. Gotta love a game that goes out of its way of crushing any delusions you may have about winning.

You play as Daniel, a young man from London suffering from amnesia (go figure) who wakes up in an old dark castle with no one else around. Unlike other survivor horror games that at least gives you a combat knife to start out with, this game gives you nothing! You have absolutely no way to defend yourself against the monsters lurking behind each corner. Your only choices are to hide, or run, and some times you can't even do those things. Hiding in the darkness keeps you out of sight from enemies, but the problem is the longer you stay in the dark, the further your sanity will decrease causing you to hallucinate (yeah, we're doing that again) luring the monsters to you anyway. So, pick your poison, hide in the dark or take your chances in the light? Your sanity can also go down by seeing monsters and strange things happening around you. It's like the game can't make you crazy fast enough.

By finding tinderboxes you can ignite several candles, sconces, and candelabras you find in the castle to provide more light. Another source of light that will become a major tool to use is the oil lamp, and in true survivor horror fashion both the tinderboxes and oil used to burn the lamp are as limited as ammunition in Resident Evil, so use them wisely.

The game is played in the first-person perspective and is once again another example of a time where I'll overlook my bias towards first-person view games. I honestly can't see this game being done half as well from a third-person perspective. Seeing it all from the eyes of Daniel allows you to put yourself behind the wheel in a way that third-person gameplay just doesn't allow, and acts as perfect bait to the horror aspect of the game which is some of the best I've seen since the original F. E. A. R. It's subtle and doesn't make the mistake of shoving it in your face like a lot of things in the horror genre tends to do.

While you have your fair share of monsters, there are also plenty of times where it's just the wind, insects, or the mere thought of something being close by that gets you. Unlike F. E. A. R., which gives you ample warning when something is about to happen, you get none of that here. Something could be lurking around the corner and you won't know until it's too late. Keeping track of your sanity is also less obvious and something you have to repeatedly pull up through the inventory screen.

Not having access to a weapon of any kind throughout the entire game makes Amnesia feel like a true survivor horror. You have to rely on your wits alone if you have any plans on seeing tomorrow, and that sets it apart from the rest of the genre. There are however several objects the player can interact with and hold such as chairs, pots, books, boxes, and anything a single person could carry.

The story is told through the use of notes and journal entries by yourself, and flashback scenes Daniel has. The notes and such usually providing a hint of what to do next and are things that can be accessed through the journal.

Like any good survivor horror game we have puzzles. These can range from finding something like a key to a door, to pulling specific books from a shelf in the right order, and fixing an elevator. These puzzles become necessary to complete in order to advance through the game. You won't be going anywhere until you solve them, and if you haven't been saving your tinderboxes and oil, you'll be solving them in the dark.

Amnesia remains true to its name and is a textbook example of how to do horror well, prompting a scare out of people who aren't even that easy to scare. If you're a fan of horror and prefer to have your horror done subtly then this game will fit in your hand like a custom made glove. If you're the kind of person who jumps at anything slightly scary, you'll want to stay away from this game 'cause chances are you're never going to get through it.