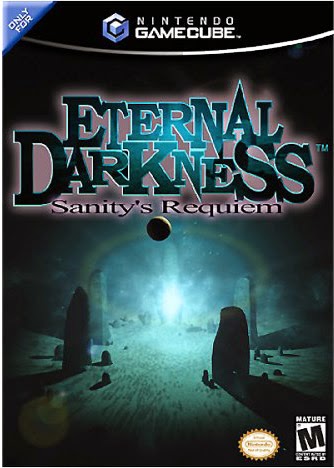 Eternal Darkness: Sanity's Requiem is a survivor horror game developed by Silicon Knights and published by Nintendo for the GameCube. It was released in the Summer of 2002 to worldwide critical acclaim, racked up to being worth one-hundred dollars brand new on Amazon, and found itself on a couple of Top 100 lists. It's the first Nintendo game I've looked at since Mario, so let's give it a whirl.

This is the kind of game that makes you pay for not familiarizing yourself with the controls before you begin, because it throws you right into the thick of it. You're in a room, undead things are coming at you, and all you have is a shotgun and you're panicking because you don't know what does what, but once you do, BANG! BANG! AHH! Get away!

The game stars Alexandra Roivas who is called up by the police to identify her grandfather's body in Rhode Island to the most insensitive police officer I have ever seen. The girl is distraught and you're just standing there staring at her while drinking coffee? This guy is more awkward than Marco Rubio.

Throughout the game the mansion acts as the central hub for everywhere you'll be traveling to while trying to solve what killed Alexandra's grandfather. Through The Tome of Eternal Darkness you're taken to various points in time controlling other characters and navigating through each new stage learning more of what's going on as time goes on. You'll also be presented with a choice near the end of the first level that will determine your own experience with the game, and the difficulty of the enemies you'll be dealing with.

You have two meters to keep an eye on, the health meter and the sanity meter. Whenever your character encounters a monster the sanity meter will go down, the lower the sanity meter, the more vulnerable you are to hallucinations, and in time these hallucinations will cause your health to decrease. Some of these hallucinations can get pretty creative and include hardware like the controller not working when surrounded by enemies, or the game making you think it just wiped your memory card. The best thing about it is you won't know it's a hallucination until it ended and is a great way to keep you on your toes, questioning reality itself. To keep from going insane you can regain your lost sanity by killing enemies.

When equipped with a weapon and battling monsters you can select a specific part of the body to strike such as the head, torso, and limbs. With a sword you can target an enemy's head and cut it off then just hack away at the rest of the body, or chop off an arm to keep it from being able to slice you. Just a few ways in which you can gain the upper-hand on an enemy. When a monster falls to the ground you need to finish them off to make sure they don't get up again. Yes, even when they're headless they'll keep coming at you.

In addition to fighting with melee and ranged weapon, you can also use magic spells to assist you which is also accompanied with its own meter. By finding spell lists and runes you can create a new spell which you can then equip through the menu screen.

The music is another great thing about the game and really sets the tone from the beginning of what you can expect. From the melody, straight down to the whispers, it provides a haunting atmosphere and makes wandering that old mansion all the creepier.

The Ancients (which takes the place of gods) are inspired by the Old Ones created by H. P. Lovecraft, three of the four possessing a rock, paper, scissor dynamic that can be exploited during gameplay when dealing with enemies, and is an interesting thing to see unfold. Each Ancient has an advantage and a disadvantage over the other and a battle between the three can go any way all depending on which one makes the first move.

The only drawback I can really think of is it's some times hard to target a specific body part when engaged with an enemy. Some times you'll push the control stick up and it'll stay on the torso instead of highlighting its head. It won't always go to the limb when you want it to and it can be somewhat difficult to disengage an enemy, but other than that not a lot on the way of downsides to really spoil the game.

Clever. This game is really, really clever. Its ability to take you for a loop and think something is happening when it's actually not is fantastic, and it introduces a lot of interesting concepts to keep the player hooked. If you're a huge fan of horror and the supernatural, then this game was made for you, and it's a crime that it never got the sequel that they wanted to make. Then again, maybe that's a good thing.