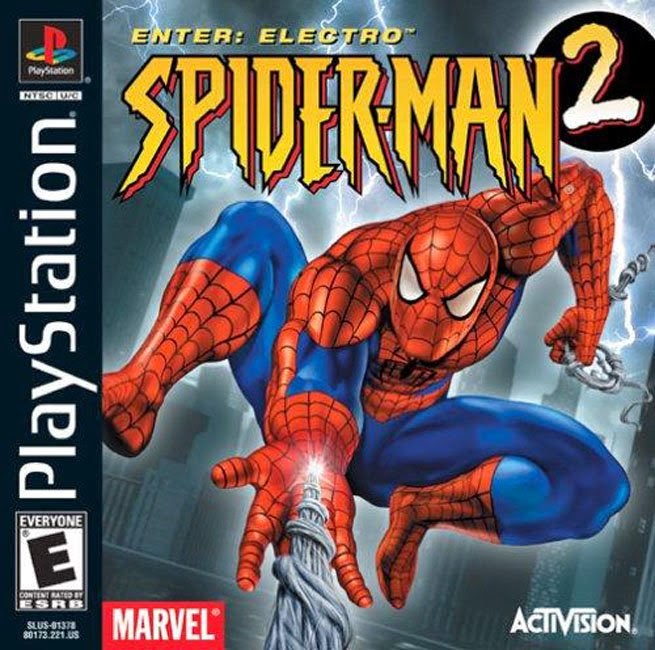 In honor of The Amazing Spider-Man 2 now playing in theaters I thought I'd take a look back on one of my favorite Spider-Man games, Spider-Man 2 Enter: Electro. Spider-Man 2 was released to the Sony PlayStation in 2001 and is the sequel to Spider-Man which came out the previous year. Unlike its predecessor, it was only made for the PlayStation. I can see why none of Sony's rivals would want it, but I'm getting ahead of myself. Let's dive in to Spider-Man 2! 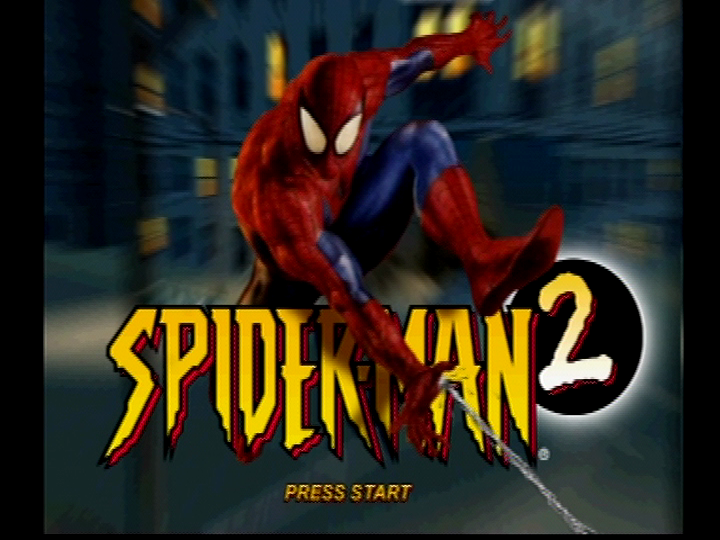 The recap does a good job of bringing the player up to speed on what happened. The only downside I can see is that Black Cat—who is seen being injured by Rhino—is never mentioned again, and unless you've played the first game you don't know what happened to her. After the scene is done playing we're taken to the main menu. 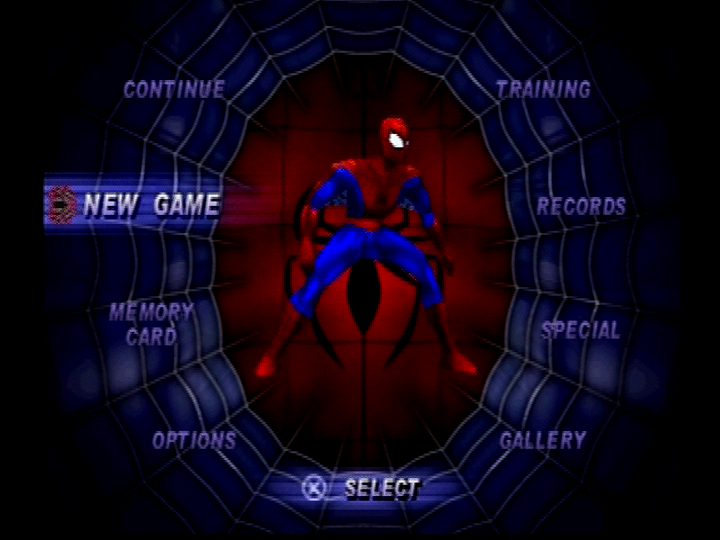 The main menu features Spidey doing his thing while you cycle through the available menus. If you have a saved game you'll have to go to Memory Card and load it up before the game will let you click Continue. Training has several missions to teach you how to use your webbing abilities in the X-Men's Danger Room training facility with Professor Charles Xavier and Rogue. Beast also makes a cameo in the first level of the game which provides more tutorial for the player. This game really has a lot of tutorials.

The game opens up with Electro breaking into a BioTech facility and stealing one of their experiments. This leads into narration by Stan Lee kicking off the first level. Gameplay wise, nothing has changed. The only difference is a minor improvement in graphics and being able to pick up elemental webbing that isn't just fire. However, with being able to put out fires, take out machine guns, chase after trains with a villain chasing you and sneak past enemies, the levels offer a lot of different objectives that makes it stand out from the first game. 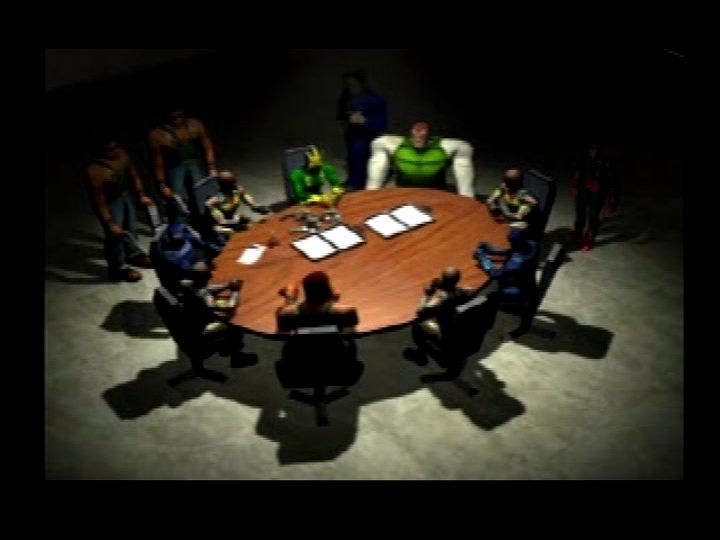 Up above we have the villains of our game: Electro, Sandman, Hammerhead, and The Beetle. If you're a long time Spider-Man fan then chances are you're familiar with everyone in the above picture, if not this may be your first time hearing about them. Electro is the guy in the green and yellow outfit, Sandman is sitting right next to him, Hammerhead is the guy in the blue suit standing between them, and The Beetle is off to the right there. They aren't exactly the first villains to come to your mind when you think about Spider-Man. A lot of the villains that do were already featured in the first game. Not shown in the above picture is Shocker and the Lizard who are also featured as bosses. The Beetle gets the short end of the stick because he only appears in two scenes and then you never see or hear from him again. So what was even the point of having him on the game, voiced and all?

With the exception of a misused Beetle, the villains in this game serve their roles well and their boss fights are entertaining. Electro, Sandman and the Lizard are probably the toughest bosses in the game. Electro for being the main boss and the game creating an exclusive form for him, Sandman because of his ability to morph into sand, and the Lizard because you need to solve a puzzle in order to do any damage to him. Shocker is pretty tough to beat as well, but only because of design flaws and the game wanting you to beat him by dropping barrels on him.

The first Spider-Man game allowed you to change costumes; some of them even had their own special powers. In Spider-Man 2, we have a new feature that allows you to create your own Spidey. After unlocking all the different Spider-Man costumes you can cycle between them and their special powers to form your own. This allows you to get creative and play with the different combinations. Like the Scarlet Spider outfit but don't want to run out of webbing? Now you can wear that and use the unlimited webbing power from the symbiote costume. 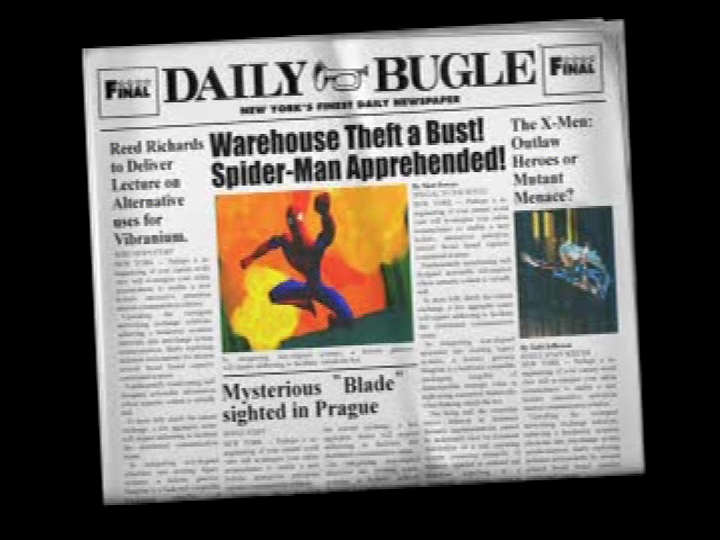 Another new feature in the game are the newspaper headlines. Some of them can only be unlocked if you get a game over. The game actually wants you to lose in order to unlock everything. That's clever. The headlines allow for further advancement of the story as well as mentioning characters from other Marvel comics. A simple yet highly effective feature.


Cons: Where do I even begin? The controls are unresponsive to the point where simply turning to the left and right becomes a chore. At times the camera will decide it doesn't want to follow behind Spider-Man and makes seeing what happens around you all the more difficult. The auto- target function won't want to work when you need it to, and Spider-Man is as slow as a snail. Yeah, the guy who's supposed to have super fast reflexes is the slowest character in the game. He even takes forever just getting up after being knocked down. A lot of the difficulty in the boss fights will come from your inability to react quick enough to what's coming at you. 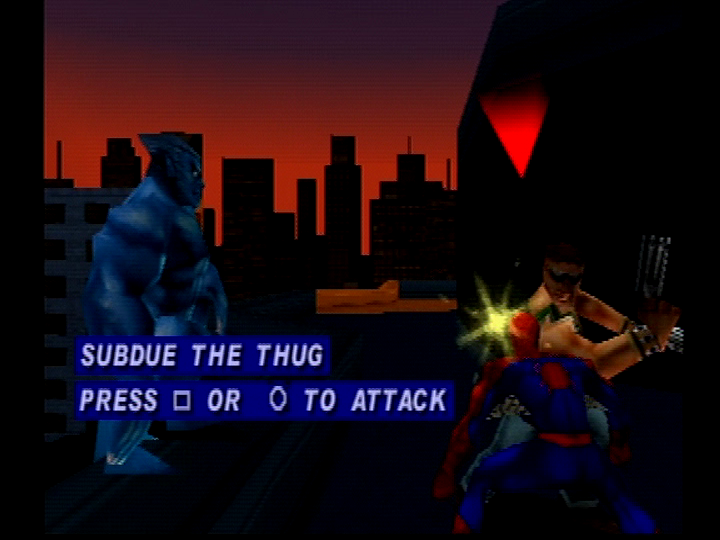 We're trying to have a conversation here!

This game is full of glitches! Take this image, for instance. The thug saw me before I came to the question mark activating Beast's appearance and attacked, taking me out of the immersion. It's funny seeing him hit me and not being able to do any damage, but what the hell? During a confrontation with Sandman he would hit me several times and his attack went right through me. At one point I fell through the floor and to my death.


The voice acting and dialog have moments where they're just laughable. In the opening cut- scene Electro overacts with the word “soon” before taking his leave. The screencap I showed you earlier with all the villains? That was taken from a scene where Hammerhead was giving a speech and the criminals acted more like Family Feud contestants than villains. It even ended with the villains chanting, “Team! Team! Team!” It was cheesy as all hell and I refuse to believe the writers didn't know how ridiculous it looked. Then we have Beast whose dialog is spliced with unnecessary complicated words in a poor attempt to sound smarter than the average person. Why do writers for children always do this? It's like Billy from Power Rangers, his dialog was a bunch of random gibberish in an attempt to make him sound smarter to the audience and when you're a kid he does. But go back to watch Power Rangers now as an adult and you know he's just speaking gibberish! It's stupid. Smart people do not talk this way!

Conclusion: Spider-Man 2 has not aged well. If this was your favorite game as a kid, do your childhood memories a favor and don't play it again. I wish I hadn't.