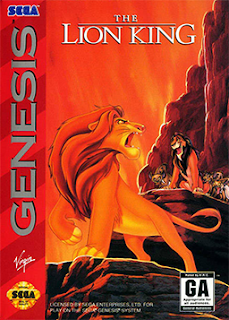 Do you like The Lion King? Of course you do, it's one of the greatest animated films of all time. I can still remember seeing it in theaters and having a good time with it. So, naturally, knowing there's a video game of the movie out, what kid wouldn't want to play it? Shouldn't be that bad, right? I mean, it's a kid's game. Stay away. Stay the fuck away. This is one of the hardest games I've ever played, and considering I gone through Dark Souls and Ninja Gaiden, that's saying a lot. Let's pop this son of a bitch in. 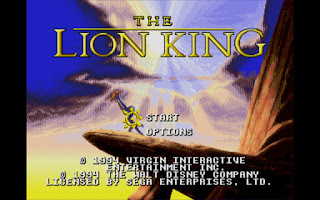 Wouldn't it just be terrible if he dropped him?

Opening isn't too bad, you have the iconic birth of Simba scene with Rafiki and a 16-bit instrumental of “The Circle of Life” that sets the tone for the game pretty well. At least we have an options menu this time!

Your choice of difficulty is Easy, Norman, and Difficult. I guess Hard was too generic for their liking. Basically, the higher the difficulty, the lower the lives you have. What I found interesting is this game was developed by Westwood Studios, the same company who created Command and Conquer. I bet they were laughing their asses off with how hard they made this, well karma is a bitch, my friend, you were bought out by EA! 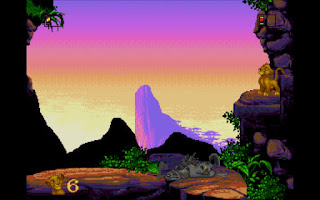 I'm the king of my castle!

There isn't much to say about the first level. You get to run around the Pride Lands killing enemies and finding bug items hovering in the air. There's something in it for you if you take the time to look around the stage instead of plowing right through it.

The meter on the top right corner is health, while the meter on the top left is your roar meter. Roaring comes in handy for stunning enemies so you can hit them. You can't paw people or have any other offense except the jump button until you're an adult. Certain bug items increase your meters, while others can take it away. Find the right ones and you can trigger a bonus stage where you play as either Timon or Pumbaa.

One thing I really like about the game is that it has pre-recorded lines from the movie in the cut- scenes, which was rare for that time. Especially on a system like the Sega Genesis that isn't exactly known for its voice acting. The first stage is good, it's the second stage and beyond when things start transitioning into bullshit territory. 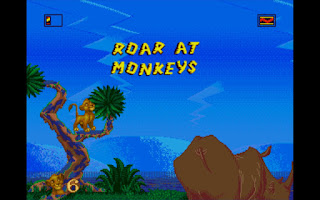 Gotta love it when the game assumes you're too stupid to figure out shit on your own.

Oh. My. God. This stage. I can't even hate on the design aspect of it, the level is designed beautifully like it was ripped straight out of the movie. If you're basing a game off a film then this is how you do it. The stage is very creative with jumping on rhinos, jumping on giraffes, and being swung around by monkeys. All with the familiar “I Just Can't Wait to be King” music.

You can't fuck around on this stage, if it even senses you're having a good time it will bite you in the ass. Try to get past the giraffes, fall in water. Swing from the rhinos' tails, fall in water. Jump on logs, fall in water. There are less people falling in water in public swimming pools! But that's not even the worse of it, oh no. As if to put a giant middle finger on this child hell we have the most frustrating part of all. 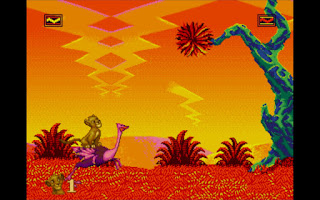 I hate ostriches. In this part you have to jump and duck accordingly before getting hit. Straightforward enough. The challenging part comes when you have to make a double jump halfway through. You need to tap C twice at just the right time or you're hitting the ground. Even after I learned how to do it I still have trouble getting past this part.

Come on... get up there! Get the fuck up there! You're only level two! The second level of a game should not be this hard! GET THE FUCK OVER IT! 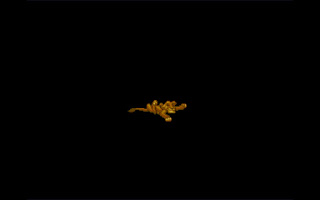 If this is where gaming is headed fuck it, count me out! Out of playing, out of writing, I wouldn't hang about. You can't make me play another stage! Opens the door to his bedroom to leave. 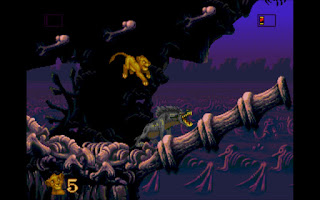 Anger is contagious, it seems.

If you can make it past one hellish musical number, we have another in the form of the Elephant Graveyard. Why do all the hyenas look like Banzai? At least when they're not performing the Ed salute. Was Scar experimenting with cloning or something?

Anyway, we have hyenas, we have flying birds wanting to kill you, and bones falling apart every which way. Some times it's not even worth stopping to take out an enemy, you're better off just running like a bitch. Occasionally, if you want to get past a blockade you do have to face the hyenas. It's nearly impossible to tell when they're going to jump, and you can only jump on them when they're tired. 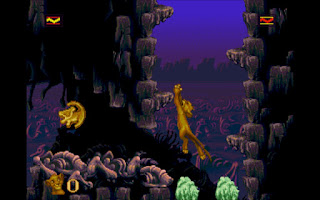 After you reach a checkpoint you need to wall jump while trying to avoid a rising stream of... green water? How did the water get polluted? No wonder these guys betrayed Mufasa, who could live like this?

Why do hard games always feel the need to have a wall jump? Is there a checkoff list I don't know about? “Making a hard game? Here are things to add for maximum frustration!” To their credit, they mended it to fit with the theme of Lion King. Simba hanging from the cliff with a scared expression on his face is a lot like when Mufasa was hanging off a cliff before Scar killed him. Now, if I can just get up this–! 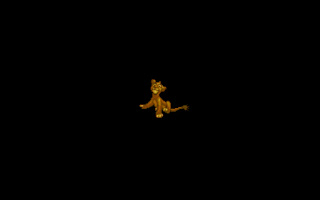 Takes the game out from the system and readies to bang it into the ground. Stops midway and cries out in frustration before putting the game back in and turning the Genesis on. 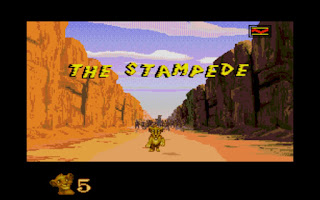 I hate my life.

You thought that last stage was bad? Get a load of this. The infamous stampede scene. Simba can be moved to the left and right of the screen in order to avoid the in-coming buffalo, and you need to jump to avoid rocks that appear in front of you. Give the devil his due, they managed to recapture the intensity of this scene from the big screen. You really do feel like Simba did when his life was on the line.

Gets hit by a buffalo. Goddamn! Gets hit by another buffalo. Allahdamn! Gets hit by rocks. Zeusdamn! Continues to get hit. Odindamn! Radamn! Yevondamn! Cthulhudamn! Flying- spaghetti-monster damn! There aren't enough gods in the universe to fully describe how aggravating this is! Takes out the game from the system a second time and puts it on a table, brings up a hammer over it, but manages to stop himself. Puts the game back in. 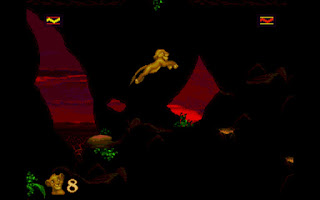 Simba's Exile is no better. Just when you think it couldn't get any worse they drop rocks on you. Meanwhile, you need to make careful jumps like in the image above to get anywhere. Naturally, you'd want to take your time, but how can you with all these rocks falling from the sky!?

In one part of the level you're being chased by a boulder and there's an enemy in your way. You don't have the time to stun him fast enough before that boulder gets you. If the boulder hits it's an instant death. You have to get hit and keep running for dear life. That's another thing about this game, no matter how good you get you're still going to get hit. 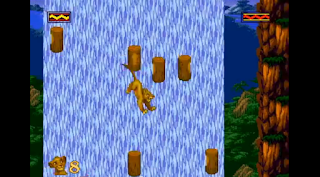 Hakuna Matata... More like Hakuna Matshita, you're better off cutting off your damn fingers! Look at this! Forget Mario 2 falling logs, this takes the cake. You know what's worse? When you're swinging from point A to point B. Simba doesn't want to go in the direction you want him to and ends up jumping the other way. Go left. Go left! Not right, left! Don't even get me started on the monkey at the end. He throws a bunch of bananas at you (at least I think those are bananas) and then slam his fist into the ground. Get used to jumping.

After the Hakuna Matata stage we're brought to the second half of the game where you play as Adult Simba. Okay, being able to slash things in the face is extremely satisfying. Makes fighting off hyaenas a little easier, too. 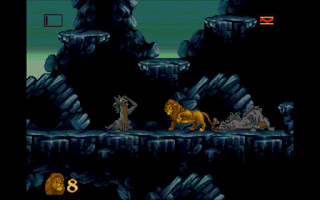 Adult Simba is all business.

While the slash helps a little bit, the game makes up for this by having the latter stages be even harder! Simba Returns is a damn maze! There are hyaenas everywhere! Where am I suppose to go!? If I never see another hyaena as long as I live it will be too soon.

Another enemy the game introduces by this point are leopards. I don't remember those being in the film, but at least it makes sense to the setting. They're not just adding robots and ninjas for the hell of it. 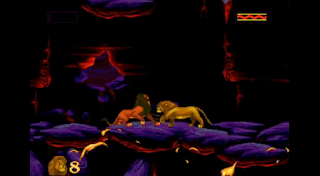 Fuck you, Scar, you piece of shit!

On the last stage you get to go one on one with Scar himself on Pride Rock. The whole place looks like it's descending into hell as we speak. The fight itself is pretty reminiscent of the movie scene, they're swiping their claws at each other, Scar keeps pushing you back, and the animation on each sprite is well put together.

Scar's health is ridiculously high and your swipes don't do nearly enough damage. God help you if you have a three button Genesis controller like me because special moves are a million times harder to pull off. Maul! MAUL! If you're lucky enough to get to the top cliff you need to throw his sorry ass over the ledge, but that only works if you get his health down. So, get ready for tapping your fingers off because that's a lot of swiping. 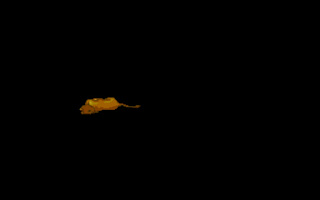 FUCK THIS GAME! I'd rather push out a golf ball sized kidney stone out of my dick than play another infuriating second of this 16-bits of ass! It'd be easier to run off to the jungle and punch the wildlife! This game is a piece of shit and I want the last seven days of my life back!

Takes the game out of the system and holds it up. Be prepared for an ass whopping! Bashes the cartridge onto the floor repeatedly while screaming. Brings the cartridge out to the kitchen's table and smashes it relentlessly with a hammer! Do you feel the love now, bitch? Takes the game outside, throws it into the dumpster, lights a match and tosses it in burning the game with the garbage.

UPS Man: Walks up to the scene. Package for a Mr. Ayen.
Ayen: Takes the box and opens it to unveil the Super Nintendo version of The Lion King … Tosses it into the fire with the Genesis version.