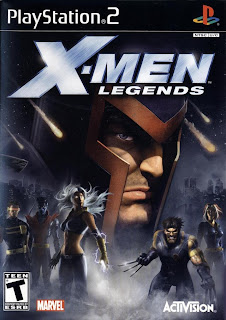 X-Men Legends is an action role-playing game developed by Raven Software and published by Activision for multiple platforms. Based off the popular Marvel comic book franchise created by Stan Lee and Jack Kirby making it debut on September of 1963. This review will be looking at the PS2 version.

The game starts off with a news broadcast featuring various reports of mutant incidents throughout the globe, bringing us to New York where a new mutant by the name of Alison Crestmere just coming into her powers gives the town a lava bath before being captured by Brotherhood member, The Blob. You start the game off as everybody's favorite lone wolf, Wolverine!

Wolverine: Hey, bub. You should have called in sick today.

Going off the updated costumes, X-Men Legends takes place in the Ultimate Marvel universe, a separate universe that Marvel created in order to attract non-comic book fans and not scare them off with many years of preestablished continuity. One would ask why they would even bother to go through that much trouble to reach out to people who don't read comics, but I digress. The game offers plenty of throwbacks from previous comic books and fanfare from alternate costumes, comic book collections, concept art, and its enemies that can be unlocked in the Danger Room mode found on the main menu.

The voice acting is top notch, and while there are probably many familiar voice actors in the game, I think the most notable one is Patrick Stewart who's back to reprise his role as Charles Xavier. When I played the game for the first time I thought it was just a really good Patrick Stewart impersonator, but I checked and it's him. He isn't new to voice acting either as anyone who has watched Family Guy and American Dad will be able to tell you.

I especially like how the story for the most part is told from the point of view of Alison, voiced by Cree Summers who is probably best known for her character Winifred “Freddie” Brooks on A Different World, and her work on the Rugrats and Inspector Gadget. Alison has just been formally introduced to the X-Men and is struggling with her decision to join them. She's our eyes on the outside looking in and is able to ask many of the questions that we're asking ourselves.. It's always refreshing to see a female character take center stage who isn't just eye-candy, too. More of that please.

If there are some critiques I have with the game, it's when I reached the end of X-Men Legends. It started to glitch up badly. So much that I had to save constantly and then load up the save point just to be able to finish. Just something to look out for when you make it to the final boss.

With all of that said, whether you're a long time X-Men fan, or just getting into the series, X-Men Legends is a must have for any X-Men fan. The gameplay is enjoyable, it has plenty of X-Men characters to choose from, and villains to fight with a well constructed story.