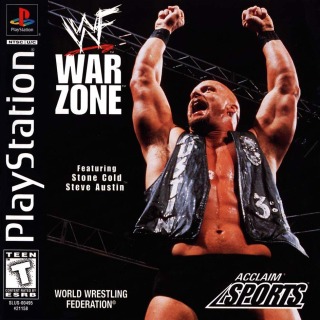 In the aftermath of WrestleMania 28, I decided to take a look back at the first 3D video game based off of WWE (then WWF) sports entertainment company published in 1998.

The roster is mainly based off their roster in 1997, and it consists of Ahmed Johnson, Bret Hart, British Bulldog (Davey Boy Smith), Faarooq (Ron Simmons), Goldust (Dustin Rhodes), Kane, Ken Shamrock, Mankind (Mick Foley), Mosh, Owen Hart, Rocky Maivia (later dub The Rock), Shawn Michaels, Stone Cold Steve Austin, Thrasher, Triple H, and last, but certainly not least, The Undertaker! Like a lot of WWE games, the roster would be a tad outdated by the time the game came out. Shawn Michaels would have been out due to a back injury, and both Bret Hart and the British Bulldog would be in then rival company, WCW.

Right off the bat the main menu is pretty creative. Pressing start on the title screen gives us a clip of a run-down office building. The main menu acts as an elevator with the gamer feeling like he's inside of it and each option brings you to a different room.

On the main menu we have: Start Game, Training, Create Player, Options, High Scores, and Biographies. In Start Game we're taken to our game modes. One Player has Challenge, Versus, Tag Team, Cage, and Weapons match. Two players gives us more options with Tornado Tag (both teams are in the ring at once), and cooperative where both players are on the same team. Three players gives you the option for a 3 man versus match, and four players a 4 man versus match as well as a co-op cage match.

In Challenge Mode you fight to climb up the ladder of the WWF (or television monitors in this case) to become the HEAVYWEIGHT CHAMPION OF THE WORLD!!!! through a series of singles matches. During your climb you can run into people you faced before wanting revenge. When this happens, you'll get a little live action game promo performed by the Superstars themselves. Some are good, and some are clearly reading from the teleprompter. Once the promo ends, you'll be in either a Steel Cage or Weapons Grudge match.

Then you have your Training which is pretty self-explanatory. Pick your wrestler and learn how to fight with them against a trainer in either a single move exercise or a free for all. Press the pause button to pick the position of yourself and the trainer.

Create Player, still to this day, is a ton of fun when you're feeling creative. Now mind you, this came out in 1998, so you aren't going to get a lot of details like you do now, but there is still a nice variety of selections to choose from. You can also make women wrestlers (while there isn't any default women wrestlers in the game to my knowledge), but you have to unlock that ability by playing through Challenge mode.

High Score keeps a record of wins and losses against you and the computer, or you and a friend between wrestlers, and Biographies lists the attributes of every WWF Superstar in the game with a mini profile at the bottom, and their alternate outfit.

In actual matches your moves are performed in the same way you'd expect from most fighting games. You have a button for blocking, dodging, etc. For bigger moves that do more damage you have to perform combos. If you ever forget your moves just look at the moves list by pressing pause. You also have a health bar which starts at green, and as damage is inflicted it changes colors. When it reaches red you're more vulnerable to a pinfall attempt.

When you're stunned, a blue meter will appear and you'll remain stunned until it decreases. During pins or submissions, a red meter comes up and decreases either slowly or quickly depending on your wrestler's health. Performing big moves gets the fans on your side, and when the fans are on your side, you get a power boost making you come back from stuns and pin attempts quicker.

Most of the Superstars featured in the game lend their voices, and Vince McMahon and Jim Ross perform audio recordings for commentary. For all its strong points, WWF War Zone comes off more as a fighting game than a wrestling game. From having to perform combos, to health bars, it fails to bring you into that pro wrestling atmosphere, and there are some inaccuracies in the biographies. Like billing Kane as 6'9 when he was always billed as a seven feet tall monster, but if none of that matters to you then WWF War Zone may be right up your alley.