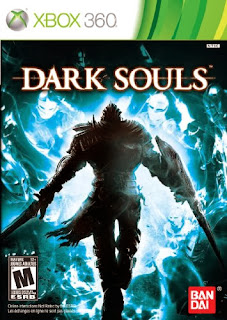 Dark Souls is an action role-playing game developed by From Software and published by Bandai. It was released for the Xbox 360 and PlayStation 3 in 2011 and became available for the PC one year later. Because of its theme including soul stealing, undead, and a difficulty setting that has left gamers screaming in horror, I thought Dark Souls was the perfect way to begin Halloween Month 2013. So, without further ado, let's dive into the Xbox 360 version of Dark Souls.

Right away the game tells you just what kind of game it's going to be, by starting you off in a prison cell with nothing but the clothes on your back, and a broken sword. As if to say “Yeah, try to make it with a broken sword, asshole!”

On the top left side of your screen you have your Humanity Meter, HP Gauge and Stamina Gauge. Humanity is counted by the numbers next to health and stamina. When taking damage, and believe me you will take damage, you can replenish health by resting at a bonfire or through using specific items and spells. Stamina decreases whenever you take a hit (even if it's blocked), dodge and attack. Stamina will recover on its own and can recover faster if you lower your shield. No stamina means no evading or attacking.

A status icon will appear when your character's status changes like if they're poisoned or cursed by an enemy. At the bottom left part of your screen you'll see four slots, these are for your equipment, and across from that is another set of numbers that indicate how many souls you've collected. Each time you slay an enemy your soul counter goes up.

You'll encounter various bonfires throughout the course of the game, these act as your save points. Do note that every time you use it any enemies you've slain up to that point will respawn. Whenever you see the infamous You Died in red letters appear on your screen in classic Resident Evil fashion, you're dead. The game likes to hammer in this fact and taunt you. Every time you die any humanity and souls number you racked up is instantly loss and of course the enemies in your area respawn to fight you again. That isn't necessarily a bad thing as you can get those souls back.

The main reason this game stands out among the rest is due to the nature of the gaming industry, whether that was something the developers were intentionally going for is unclear, but nevertheless it serves the game well. A lot of video games these days will guide you by the hand, and has been making them easier through time to lure more people in. Back in the days of 8 and 16 bits, a game like this would have been commonplace. Only, it's not as self-explanatory as those games were, and it's going to be on blind luck whether or not you do something the game wants you to do.

While those older games started off easy and the difficulty gradually increased as you progressed further and further, this game is the poplar opposite. It starts out extremely difficult, depending on what kind of gamer you are, and becomes easier and easier the more you plays. When it all comes down to it, Dark Souls is a game of memorization and strategy. You can't just run from battle to battle hacking and slashing multiple enemies and expect to get anywhere, no, you have to practice patience and know exactly where, when, and how your enemies are going to hit you and only hit them back when there's an opening. If you're not good at memorization... 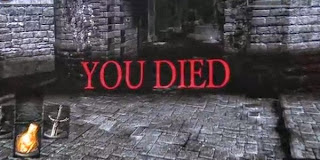 Get used to seeing this screen a lot.

The battle system can be fun. It decides to go a more realistic route in the sense that instead of hitting combos you have a quick, but weaker, melee attack and a stronger strike that takes up more stamina. You also need to be sure to use your shield to block strikes, dodge at the right time, or just learn to parry. Some fights can be drawn out because of this if both you and your opponent has their shield up and you're waiting for the enemy to strike to leave an opening. This doesn't include range weapons like bow and arrows, magic, or bombs. If you have the patience for it it can be fun and even rewarding, otherwise it's going to get old real quick.

In a rather bold, or idiotic depending on your stance, the game chooses to forfeit heavy storytelling and character development in place of expanding the lore through limited cut-scenes and conversations you have with other NPCs. The reasoning for this is to allow the player to use his or hers imagination to fill in the blanks. Once again, this is reminiscent to the old days where you had to use your imagination, assuming you cared enough in the first place. This time the technology is there, but the developers choose not to utilize it to encourage imagination. I think that's a great thing, however, with the increasing demand of more story and better characterization, this is something I just don't see catching on with a lot of people.

There are several bugs and glitches in the game that can be exploited by you to get a cheap advantage over enemies, or exploited by the game itself to kill you. The bugs in this game don't discriminate. You could just be minding your own business killing bad guys and then BANG! Camera spazzes on you and you're dead. The blocking doesn't always want to work with you, and then there's the more rare, but extremely frustrating, falling directly through the floor beneath your feet to your death! Yeah, good luck getting your bloodstain back from that one.

We have guards stuck in walls, guards walking into walls, enemies replenishing their health while they're in front of you leaving themselves wide open (not sure if bug or archer was just stupid), and enemies following you off of ledges when giving chase. Talk about being persistent. You can also trick certain bosses into falling off ledges like the Taurus Demon, and even the dragon that blocks your path on the bridge.

That's right, a full grown dragon that you see fly through the air will momentarily forget how to fly long enough to fall to his death.

The game doesn't have a pause function. Even when you're cycling through the start menu the game is still active. Meaning that unless you're somewhere safe where there aren't any enemies around, you can still be attacked and you won't be able to defend yourself until you exit the start menu. Because, you know, heaven forbid you have to use the bathroom, answer the phone, or anything else while you're in the middle of a fight. I guess they were trying to add to the game's overall difficulty, but there's just no need for it. Being able to pause the game isn't going to take away from the fun or the challenge in the game, and even Ninja Gaiden lets you go to the bathroom.

I appreciate what Dark Souls tries to do in the gaming industry, whether intentionally or unintentionally. It's reminiscent of those older, more difficult games like Ninja Gaiden, Battletoads, etc., but it doesn't always achieve this due to the design and the difficulty coming more from the ability, or lack thereof, of the player, annoying glitches, and not being self-explanatory. Had this game came out in the 80's, 90's, or any time before the “I get it” era, this game would be in better company and probably wouldn't stand out as much as it does now.

If you're tired of what the market has generated as “the norm” when it comes to gaming and are looking for a game that demands patience, and that you actually use your brain and rewards you for both, then I would recommend Dark Souls. If you're more of a casual gamer, or picky about certain things being set up where the only way you'd figure them out is word of mouth, the Internet, or dumb luck, then I'd recommend getting something else.