Croc: Legend of the Gobbos 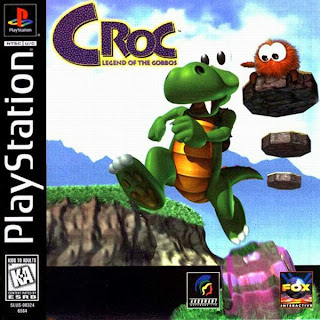 In the fall of 1997 Fox Interactive published Croc: Legend of the Gobbos by Argonaut Software for the Sony PlayStation, Sega Saturn, Microsoft Windows, and Game Boy Color. The game stars a young baby crocodile named Croc who was found by a species called the Gobbos. Everything was peaceful until one day where the evil Baron Dante invaded and captured the Gobbos and their ruler, King Rufus. Evading capture, Croc now stands alone with the challenging task of freeing the Gobbos and defeating Baron Dante.


Each stage has crystals that Croc collects earning him an extra life, like the fruits did for Crash in Crash Bandicoot. This time however you can take a hit and lose your crystals. Get hit by an enemy without any crystals and you die. There are also five colored crystals that permits you into a bonus stage. You can find crystals in boxes or just lying around on the ground.

In addition to the crystals you'll also be looking for Gobbos. Like the crystals, they can be found on the ground, in boxes, or cages.

There are over 40 levels and 50 different enemies to fight, with up to nine stage bosses. Enemies has a tendency to respawn after you take them out so whenever you have to linger in a spot for too long watch out for their return.

Unlike Crash, where you could only save during the bonus stages, Croc: Legend of the Gobbos gives you the option to save in-between levels so you never have to worry about losing your data. You can also use passwords as an alternative.

The biggest flaw I can see has to be the camera. There are times where the camera doesn't want to work with you. Mainly when you want to see behind Croc. Other than that there isn't much to complain about. It may not be the most memorable game of all time, but the visuals are stunning and without dialog it really does allow you to take in the environment.