Spyro the Dragon. Another video game from my childhood that I have many fond memories of, and perhaps the only game I've played where the enemies actually moon you. Oh yes, they know you're literally going to toast their asses so why not show it to you?


Spyro would go on to become a critical and commercial success, but much like Crash Bandicoot, things would go downhill when the series moved on to other developers. I don't know what the deal is, but it seems whenever platformers venture too far away from their roots things just doesn't work out too well. Just ask Sonic. 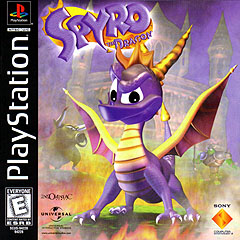 Originally developed by Insomniac Games, Spyro the Dragon charged his way into all of our hearts in the fall of 1998. At the beginning of the game we cut to an on-air interview being conducted, and how dragons got their hands on human equipment to begin with is anyone's guess. Everyone has lived in harmony up to this point, but when a creature called Gnasty Gnorc is mentioned, one of the dragons cite that he is not a threat to the Dragon Kingdom, and ugly. Well, as you can probably imagine by his name alone, Gnasty Gnorc doesn't like this one bit and cast a spell that turns all the dragons into stone (so much for not being a threat), except for Spyro, who manages to evade the spell due to his small stature. Honestly, when I watched it it looked like he was just lying there the whole time.


This pegs the question, if he's powerful enough to just turn all the full-grown dragons into stone what's stopping him from invading their worlds? Better yet, why are adult dragons, upon being released, so okay about a baby dragon going after a guy who just kicked their asses without having to leave his lair? It makes no sense, but I digress.


You start off in the Artisans world where you release your first dragon (not a very hard spell to reverse). He gives you some starting information and tells you to free dragons first before going after Gnasty Gnorc. After the clip you can save your game by stepping on the platform left behind by where the dragon was once trapped. Each dragon you release will offer you tips throughout the game, some of them helpful, some of them not so much, and others will just waste your time.


In order to access the next world you have to release a set number of dragons, gems, and dragon eggs. Instead of levels you access each stage through portals. Latter worlds offer a Flying Stage where Spyro can fly freely through the air and has to get past four different sets of obstacles before time runs out.


Throughout the game Spyro has a little golden firefly that follows him around. This firefly acts as a means of protection against enemies and each hit it takes changes the color of its body. When the firefly is no longer present that means one more hit will cost you a life. In order to keep the firefly afloat seek out animals and burn them. Doing so will release a butterfly (don't ask me why) to feed your butterfly.


There isn't much in ways of drawbacks without nitpicking. There are times where the camera won't follow the player, but I didn't find the issue to be as apparent as it was in Croc. As I've already mentioned above, the dragons can go from helpful, to not so helpful, especially if you actually took the time to read the instruction manual. Playing the game you can really tell how much thought and effort went into it. It looks great, it sounds great, the music is great, the voice acting isn't amazing by any stretch of the imagination, but it's not bad either. For something mainly meant for kids it's pretty good. The characters designs and level designs also look great and the game itself really takes advantage of everything the original PlayStation had to offer.
Get it
Posted by Ayen at 4:09 AM