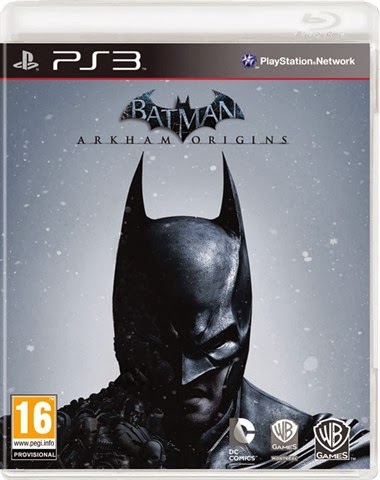 Batman: Arkham Origins is an action-adventure game developed and published by Warner Bros. Games and was released on the PlayStation 3, Xbox 360, Wii-U, and Windows PC last year. It is the third installment in the Batman Arkham franchise and a prequel to Arkham Asylum and Arkham City.

It has been two years since billionaire Bruce Wayne donned the mask and people are still in denial about his existence. From the GCPD going as far as to claim “There is no Bat!” on national television, to criminals thinking he's just a myth the police made up to scare them, but those who has had the misfortune of running into him know he's no myth.

Not much has changed in the overall gameplay. You can still clear your way through most enemies by spamming the attack button, and moving from one guy to the next, and it always play that final punch in slow motion. You still have plenty of scenes where you're in a wide room crouched down on gargoyles where you slide, drop attack and perform inverted take downs, too.

Once the novelty wears off these elements get repetitive and boring to the point where you just want it to end. While I understand and expect additional installments to carry over elements of what made the predecessor so great, it comes across more as lazy rehashing. If you've played Arkham Asylum then you've pretty much played this game already. If you've played Arkham City then you already know what to expect when it comes to the open-world environment in the game. That's not to say that it's without any good qualities, because where the game shines it really shines.

One of the most notable highlights of the game are the boss fights. While battles with regular enemies are repetitive, you never know what to expect when you begin a boss fight. With Killer Croc you're practically raping the X button, Deathstroke you're countering constantly just to survive, Bane you're going to want to dodge like a bitch, and Electrocutioner is a one-hit takedown. All you have to do is punch him once and it's over. The only real beef I had with the boss fights I encountered was Copperhead's, since it feels like you're facing Ra's al Ghul all over again.

Story wise, the game doesn't really start until you get to the Joker, and even though you know who the Joker is going in, the writing does a good job of building this character up with a crime scene leading to his eventual reveal. Roger Craig Smith and Troy Baker does brilliantly in their lines and emulating both of their predecessors so well that at times you really can hear Kevin Conroy and Mark Hamill's voices. Usually that would be a problem, but considering this is the Arkham Universe where Conroy's Batman and Hamill's Joker were primarily featured, I'll let it slide.

During the Joker's scenes everything from the writing, to the animation, to the voice work is done with such tender loving care that it really does stand out from the rest of the game, which is exactly how it should be given the fact that what the Arkham Series basically boils down to, Batman versus the Joker. Although, you could argue that's what the entire Batman Franchise boils down to, but that's a discussion for another day.

The problem is, the Joker is handled so well that he overshadows the other villains. I couldn't have cared less about Black Mask, Electrocutioner, is just used for comic relief, Croc is only threatening when he's trying to rip you apart with his teeth, Copperhead isn't well known enough to leave much of an impression asides from “who?” and even the villains I do like, like the Penguin and Deathstroke, feel underwhelming. I know you're trying guys, but I just don't feel it. About the only one who even comes close to the Joker is Bane, but that's mainly because Bane is such a good character and villain (and they're smart enough to use his comic counterpart) that he can hold his own against the Joker. Though I will say Firefly, a villain I never heard of before this game, does a pretty decent job of being intimidating when you're on that bridge. The villains you face in side-quests suffer the same problem, either you don't know who they are or you don't care to. Not to mention the Riddler stuff is just as tedious as they've always been.

In one part of the game you can actually take control of the Joker, not just in the Challenge Mode like in Arkham Asylum, but in the actual Campaign Mode. It's another standout moment when compared it to the other games, and while it's mostly a short scene, it gets its message across and is a really fun scene as you dive into the mind of a madman. Overall, the early stages of development between the iconic relationship between Batman and the Joker is an interesting one, and seeing how excited Joker is by finally having someone he can relate to is as sincere as I have ever heard the Clown Prince of Crime.

The Challenge Mode is divided by Intense Training and Predator. The former being fighting a bunch of guys all at once and performing different combos for points, and the latter having to do with sneaking up on unsuspecting foes and taking them out in the fastest time possible. Most of it you need to be online, except the part that you can also access in Campaign Mode at the Batcave. Any costumes you unlock for Batman can be selected there too, so if you want to play around in new costumes, challenge yourself, and kill time it's a good mode to play through, otherwise there isn't much there.

Batman Online has two main modes, Invisible Predator Online and Hunter, Hunted. In the Online Mode you have the option of playing as Batman, Robin, Joker's Gang, and Bane's Gang. Each character is customizable, but requires you to level up in order to unlock new costumes and weapons. The former mode is a gang war between Joker and Bane's thugs, and they have to eliminate the other team to win, Batman/Robin can win by acquiring enough intimidation points. Hunter, Hunted excludes Robin from the game and just has the gangs facing each other, and Batman in a last man standing match.

A gang member can also play as their leader to gain more powers and abilities. While it's cool to play as the Joker, Bane and hell, even Robin, there isn't much going on for the Online Mode. Some times you can get connected to the game, some times you won't. You can be disconnected mid-game without any prior warning and the two modes can feel more repetitive than elements in the main game. It doesn't help that there are very few maps to choose from, and anyone of any level can join in on a game giving them an unfair advantage.

The glitches in this game are annoying as hell and caused me to restart the game three times (thank God for auto-save). In one part when the game is automatically selecting the gadget you need to use next, it freezes Batman before that can happen and all I could move was the camera. In another while fighting prisoners the game froze the villains up on the ledge that are supposed to jump down to face me. And again when I faced Firefly's thugs, we were all ready to fight but they weren't attacking and I couldn't attack them. One amusing glitch that didn't cause me to restart was one cop I glide kick that was stuck in the wall. When walls attack, tonight at eleven.

Here what's it like trying to select a gadget that happens to be on a bottom corner, or the right side near the top of the selection screen, “Oh, you want to use that gadget? Let's take you over here instead! Okay, you're on the gadget you want to use– SIKE!” Just let me hack this door, Jesus Christ!

The side-quests are way more of a chore than the main game with nowhere near the same payoff. As a matter of fact, running around the entire city is just one big chore. I guess the developers really wanted you to know what it's like being a vigilante. One minute you're enjoying the main story and the next you have to take a break to disarm a bomb. If you don't want to bother with them right away save them until after completing the main story, because believe me the game won't stop until you complete them all anyway.

As a general game on its own, it's okay. As an additional installment in a series? It feels rehashed. As a Batman game? It falls flat in a few areas and excels at the rest. When the game is good, it's really good and worth playing even if you don't enjoy the entire package. I would recommend it if you enjoy a good story where Batman, the Joker, and Bane are concerned, or if you haven't played any of the other games. Otherwise, I'd give it a pass, honestly.