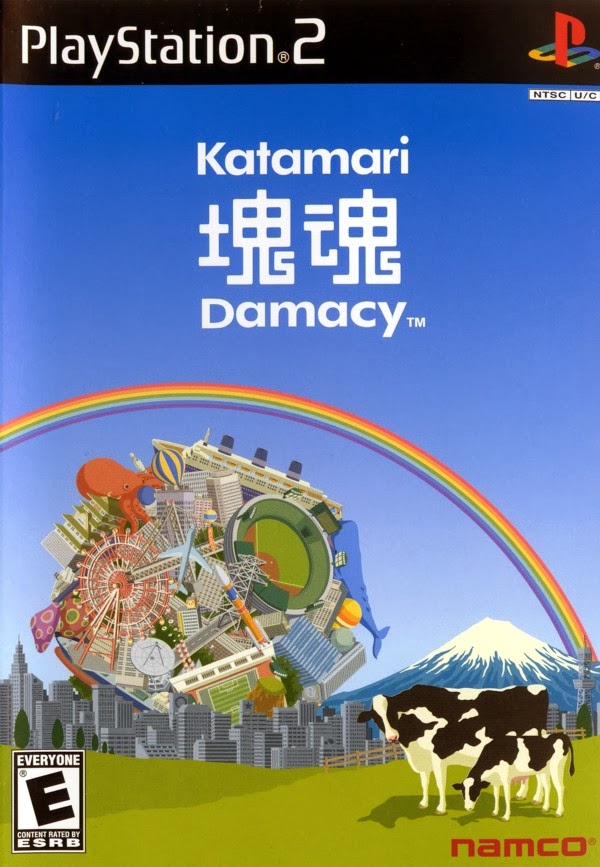 Moo! Katamari Damacy is a third-person, puzzle-action game developed by Namco and Now Production and published by the former. It was released for the PlayStation 2 in March 2004 in Japan and came over to the states in September. The game saw surprise demand from retailers who only ordered a few copies of the game. It's considered one of the strangest and most original titles for the PlayStation 2, and it doesn't take much to see why. So, without further ado, let's dive into Katamari Damacy!

We start off with a scene of cows eating grass in the dead of night until a shooting star zipped across the sky and exploded on land bringing about day and a large male character with a rug for a head wearing a cape appeared before the cows, rainbow lights shinning to the left and right of him. The cows ran off, the man flew away and cloverleafs rained down from the sky. A bird flew through the air carrying the Prince and a second one carried a turtle.

Ducks sang, a giraffe and elephant danced, a rainbow erupted from a volcano and sent down the Prince and he danced on his father's knee while he played guitar and his wife watched in the background. They took off in their car as pandas danced and left behind a trail of mushrooms on their way back to the castle and that is what being on acid feels like.

You are the Prince, a little green thing with a rug for a head. Your father is the King of All Cosmos! He is also the biggest douche of all the cosmos. One day he accidentally THE ENTIRE UNIVERSE which caused the destruction of all the stars. Your task is to roll.

By rolling up things on the Earth you can grow a katamari to a certain size that is desired by the King, and get it later turned into a star to repair the damage that has been done in the sky. In other words, your father left you behind to clean up his mess.

“Wallet, keys, rings, hopes and dreams. We lost it all.”

You start off with a tutorial which teaches you the basics of gameplay before moving onto the first stage. At first you're in enclosed areas at somebody's home picking up everyday household objects. As you progress through the game you'll move to more open areas, picking up larger and larger objects to make bigger and better katamaris. Each stage has a set time limit well within reason of your set goal, and if time runs out before you get the katamari to the desired size, your father will insult you.

Beware of obstacles such as mice, dogs, cats, people. If you hit any of them what you collected for your katamari will fall off decreasing the size. Some larger objects will have this same effect until you build your katamari big enough to where it can roll them up too. This also applies for going up and down certain ledges. The obstacles combined with the time limit provides a very good challenge that makes the game tough, otherwise you'd just be rolling crap all day.

Before each stage begins, the King of All Cosmos informs you of a gift he got for you which he accidentally left on Earth. Not surprising considering what we know about him already. Finding the item will add it to the gift collection you can look at on your home planet. Sadly, I haven't been able to find any of these gifts, so I can't go any further. Keeping an eye open is all I can advise. First, he makes you clean up his mess, and now he's making you have to find your own gifts. At the end of each stage the King takes the katamari you made, shows you the top three things you collected the most of, and then turn it into a star, but not before saying you can do better.

In-between each stage we get a cut-scene following a family around. While most of it, as far as I can tell, is played for laughs, the scenes actually highlight just how oblivious we as a people can be. The fact that all the stars in the sky are gone and is being reported all over the news goes over the mother's head and it's only the children that are actually paying any attention to it. The mother is so wrapped up in her own little world that she even thinks the children are just making it up. This is exactly how we are when something major is going on in the world around us.

The relationship between the King and Prince is also written rather well. Here we have the Prince doing the best job he, and every time he finishes the father always comment about how the Prince can do better, or should do better because he's the Prince. This makes the King look like he's being too hard on the Prince, like nothing is ever good enough for him, and putting a lot of pressure on him which can be bad for any kid, royalty or not.

On the flip-side, the King isn't without some justification. Parents often want to push their children to succeed and not want them to settle. This is double in the case of royalty since said child would one day ascend the throne, and the King will not hold back. Played a certain way it can look like a kid trying to get the approval of his father, and nothing ever being good enough. I would not recommend this game if you have daddy issues.

I love the comedy, not just in writing, but what you can do gameplay wise. At a certain point in the game more people passing by start to notice you and you can knock a couple of them over. Get your katamari big enough and you can even roll up children! Children! Kid in your way? Roll them up! Women screaming and running for their lives? Roll them up! Cops shooting at you? Roll them up! You can even roll up your cousins (by the way you have cousins) if you can find them. Just watching them dangling off the katamari squirming is one of the funniest things I've done in a video game.

The rest of the comedy is done through the King's speech, and simple descriptions of Earth things. The King of All Cosmos is as funny as he is cruel.

“Here we are. Earth. Full of things as usual.”
“It is not your fault. It is our fault for believing in you.”
“What is it...? It's lacking a certain something... Oh, yes! We get it! Prettiness! This sky is not pretty at all. It's rough and masculine. Possibly sweaty.”

Just look at some of these descriptions:

American Guy – “He loves the U.S., but he likes Japan just as much.”
Burglar – “He wants to be stealthy, but he looks so obvious. What a fool!”
Chubby Housewife – “The bigger she gets, the more powerful she becomes!”
Cobra – “It's rumored that there are even larger ones hidden in trousers.”
Handcuffs – “If you do something really bad these may be used on you! Or if you are good...”
Merman – “Everybody loves a mermaid. Not so with a merman.”

Comedy for all ages and the description of the American Guy is so spot on around this time period it hurts.

However, the game doesn't have much variety in the gameplay. The only time it shake things up is in the bonus levels, and only by a small margin. At the beginning of every stage you'll get the same opening with the King, some similar lines will be uttered and it's the same for when the stage ends.

What the game lacks in variety, it makes up for in difficulty, and how much fun you have with the sheer insanity and it's multiplayer so you can share it with a friend. If you're looking for a fun game to laugh your ass off to, then Katamari Damacy may very well be what you're looking for.